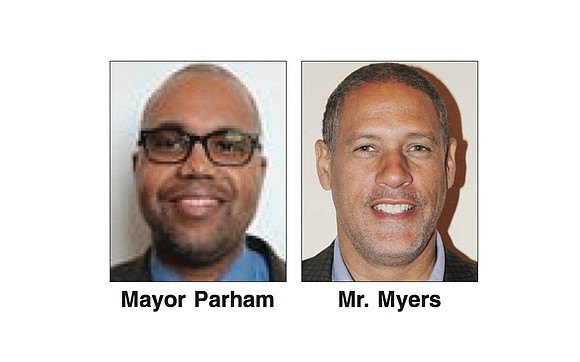 Furious over the financial crisis that grips Petersburg, a faction of city voters has taken the rare step of asking a judge to remove two members of Petersburg City Council they blame for the city’s condition, Mayor Samuel Parham, 3rd Ward, and his predecessor, Councilman and former Mayor W. Howard Myers, 5th Ward.

Their future as elected officials is now in the hands of Petersburg Circuit Court Judge Joseph M. Teefey Jr.

Judge Teefey has ordered both men to appear in court 9 a.m. Monday, Feb. 6. He could decide after hearing evidence whether to oust Mayor Parham and Mr. Myers, whose current four-year terms extend through December 2018.

Removal would lead to a special election to fill their seats.

The court request comes as the Robert Bobb Group, a consulting firm brought in to help the city, continues work to repair the city’s finances.

In the next two weeks, the seven-member council is to consider the Bobb Group’s proposed amendments to the current budget to bring it into balance. The consulting group also is pressing to collect unpaid taxes and delinquent utility bills to improve revenues and could propose selling surplus city properties to raise additional money.

That has not soothed Clean Sweep Petersburg, a group that has hammered the City Council for more than a year — particularly the four-member majority that Mayor Parham and Mr. Myers have led that has controlled policy and spending — over a flawed water billing system and failed oversight of the budget.

The founders and leaders of the group, Gina Harrison and Barbara Rudolph, spent months securing the required number of signatures in each ward — 10 percent of registered voters — and drawing up the case for removal.

Last Friday, on the same day President Trump was inaugurated, Clean Sweep Petersburg filed the paperwork with the court. Ms. Harrison said the group is working on a similar petition to remove Petersburg Treasurer Kevin A. Brown, who faces re-election this year.

The separate removal petitions for the council members includes the same allegations — that Mayor Parham and Mr. Myers should be removed “due to neglect, misuse of office and incompetence in the performance of duties that had a material adverse effect on the conduct of the office.”

Mayor Parham and Mr. Myers, who are being represented by the city attorney’s office, plan to mount a vigorous defense.

“As God is my witness,” Mayor Parham said after hearing of the removal petition, “I have sought to make the best decisions I could with the information that was available.”

He said he believes that will be the finding when Judge Teefey considers the matter.

“I welcome the process,” said Mr. Myers after he was notified. “I have properly carried out my council duties,” and critics will not be able to prove otherwise, he said.

The petitions outline at least 11 instances in the past year in which the two men allegedly either ignored critical financial information, failed to take action or undertook secret actions in violation of state law.