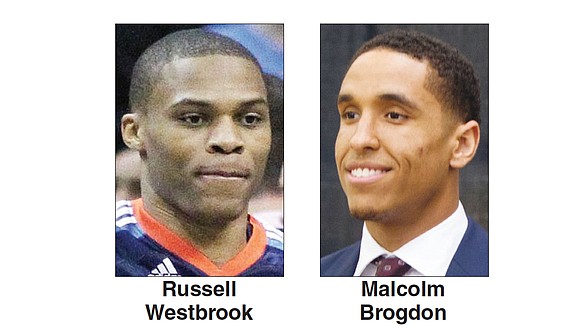 Russell Westbrook has blazed a trail of triple doubles to the NBA’s highest individual honor.

The 28-year-old Oklahoma City Thunder guard was named the NBA’s Most Valuable Player on June 26 on the strength of these powerful regular season numbers:

MVP is based on regular season play alone and is voted on by the media. The Houston Rockets’ James Harden and Kawhi Leonard of the San Antonio Spurs were the other finalists.

A six-time NBA All-Star, Westbrook was a first round draft choice out of UCLA after growing up in Long Beach, Calif.

He wears a wristband reading “KB3” in honor of childhood friend Khelcey Barrs III, who died from a heart ailment.

Westbrook is entering the second year of a three-year contract with the Oklahoma City Thunder. He has an option to become a free agent following the 2017-18 season.

Malcolm Brogdon is the long shot that paid off for the Milwaukee Bucks.

The former University of Virginia wing forward has become the first player not drafted in the first round to win the NBA’s Rookie of the Year Award since 1965.

The 6-foot-5 Atlanta native was a second round draft pick — and 36th pick overall — in 2016. Milwaukee chose Thon Maker, the 7-foot-1 native of South Sudan who played his sophomore and junior seasons in high school at Carlisle School in Martinsville, with its first round pick and 10th overall in 2016.

Rising to the occasion, Brogdon averaged 10.2 points, 4.2 assists and 2.8 rebounds this season while also impressing on defense.

Brogdon becomes Milwaukee’s first Rookie of the Year since Kareem Abdul-Jabbar in 1970.

The first African-American NBA Rookie of the Year was 6-foot-11 Ray Felix in 1954. Felix was the overall No. 1 draft selection by the Baltimore Bullets out of Long Island University.

Brogdon is Virginia’s second player to be so honored. All-American Ralph Sampson was Rookie of the Year in 1984 with the Houston Rockets after being drafted No. 1 overall.