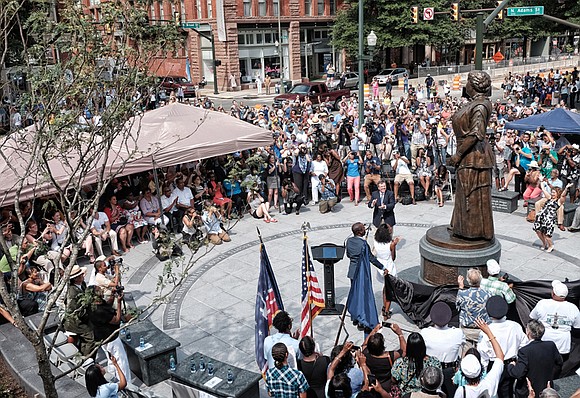 Cheers arise from the crowd of hundreds after the statue of Maggie L. Walker is unveiled at a ceremony last Saturday at the plaza at Broad and Adams streets.

The figure of Mrs. Walker and the accomplishments and contributions of the woman it represents were met by applause from the hundreds of people gathered around the plaza at Broad and Adams streets in Downtown where the statue stands.

“Many Richmonders have ancestors who began their careers not as servants, but as bank tellers, accountants, sales people, auditors and insurance writers because of Grandma Walker,” Ms. Mickens said in brief remarks to the crowd.

“Many Richmonders are here today, swelling with pride along with her family, as we unveil this statute of a woman, marking her own accomplishments on the streets of our city which she dearly loved.”

Dozens in the audience nodded and voiced their assent as the 19-year-old Ms. Mickens, one of about 30 Walker descendants at the ceremony, fought back tears to continue.

“Today, Maggie Walker stands here in her rightful place, in the heart of Richmond standing over her city. She stands as a marker to the gateway of Jackson Ward, a place where, through her hard work, she inspired her race as well as her gender to pursue a better life.”

Mrs. Walker, the daughter of a former slave, was the first African-American woman to charter and operate a bank in the United States. Despite the many obstacles of the time, the leader of the Independent Order of St. Luke benevolent society published the St. Luke Herald newspaper beginning in 1902, founded the St. Luke Penny Savings Bank in 1903, opened a department store Downtown in 1904, and was a civil rights activist who encouraged community uplift and empowerment through education, voting and supporting black-owned businesses.

The plaza dedicated to Mrs. Walker has pedestals and paving that detail her many roles and accomplishments in the city before her death in 1934.

Unveiled on what would have been Mrs. Walker’s 153rd birthday, the statue is the first in Richmond singularly devoted to a woman. 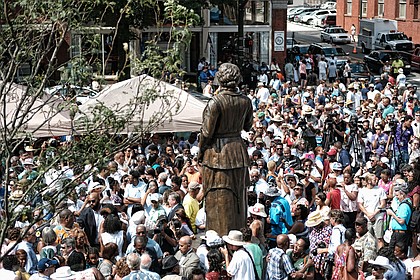 The statue of Maggie L. Walker, sculpted by Antonio “Toby” Mendez of Maryland, shows Mrs. Walker in her mid-40s to early 50s. The statue and plaza project, paid for by the City of Richmond, cost nearly $1 million.

The statue was dedicated as debate begins in earnest over public monuments in Richmond and what they represent, particularly those on Monument Avenue honoring Confederates who fought and lost a war to keep African-Americans in bondage.

Mayor Stoney, who recently announced the creation of the Monument Avenue Commission to “tell the real story,” briefly alluded to the controversy in his remarks at the ceremony before the unveiling.

“As you know, Richmond has many monuments. And you know how I feel about those,” he said to chuckles and murmurs among the crowd. “I can assure you this will be my favorite monument in the city of Richmond.” The crowd roared with applause.

Mayor Stoney then vowed that Mrs. Walker’s monument will not be the last of its kind.

“I feel like victory is won today,” said Melvin S. Jones Jr., a member of the Maggie L. Walker High School Class of 1965, after reciting lines from the anthem, “Lift Every Voice and Sing.”

Mr. Jones is credited with reviving the effort to install a public monument honoring Mrs. Walker about two decades ago. He laughed as he recalled patiently waiting outside the office of former Mayor Dwight C. Jones to advocate for the project years ago. He and several other speakers thanked the former mayor, who also was in the audience, for ensuring city funding and momentum for the project’s completion.

Afterward, people lingered joyfully in the plaza to admire the statue and pose for photos around it with friends and family.

“I love the statue” said Dalila Brooks of Washington, another of Mrs. Walker’s great-great-grandchildren. “I love the idea that she’s honored in this way, so that she’s not forgotten.”

She said she hopes young people passing the plaza will take a moment to read the bits and pieces of her story that surround her.

“The words became her identifiers, to help to guide her on a path that would be beneficial not only to her, but to people around her,” she said.

The statue and plaza are located less than a mile from Mrs. Walker’s home at 110½ E. Leigh St. It is now a national historic site open to the public through the National Park Service.

David Ruth, superintendent of Richmond Battlefield Park and the Maggie Walker National Historic Site, called the statue a much welcomed addition to the city’s commemorative landscape.

“This city is dotted with public shrines to Virginia’s exalted sons, and today, we can proudly say one of her esteemed daughters, too,” he said to cheers and applause.

“Mrs. Walker was in the business of building monuments herself. Her monuments were not statuary, nor to the past, but monuments to possibility,” he told the crowd.

“These monuments to black businesses, as Walker herself called them,” Mr. Ruth continued, “were all headquartered mere blocks from where we’re standing today, yet with impacts that echoed across this continent.”