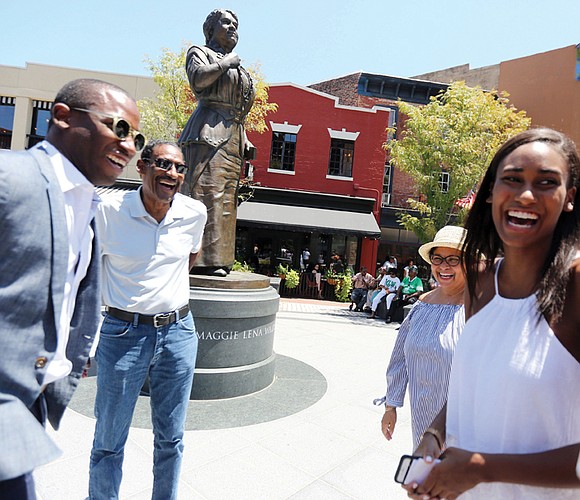 More than a hundred people took to the cobblestone streets of Jackson Ward last Saturday to celebrate the life and accomplishments of the late Richmond businesswoman and icon Maggie L. Walker.

Simultaneous events hosted around her statue at the plaza at Broad and Adams streets Downtown and at her home at 110 ½ E. Leigh St. marked what would have been Mrs. Walker’s 154th birthday following a life of activism and advocacy on behalf of the African-American community. Among her many accomplishments in Richmond and nationally in the areas of economic, educational and political advancement, Mrs. Walker is best known as the first African-American woman to charter and operate a bank in the United States.

“Richmond is internationally known now,” said Melvin S. Jones Jr., an alumni of the Maggie L. Walker High School Class of 1965 who worked for more than two decades to ensure the monument’s creation.

Mr. Jones was quick to spread the praise around, saying, “This is not only just for me, this is for everybody out here.”

An atmosphere of intimacy and casualness replaced last year’s bustle when a crowd of hundreds attended the unveiling of the Walker statue held on her birthday weekend. From people dancing in the plaza to the music of Glennroy & Company, to shuttle van passengers eagerly chatting with the drivers who transported them across the six blocks between this year’s dual celebrations, community members comfortably settled into a new status quo.

It was a change in mood Liza Mickens picked up on as she called on those present Saturday to continue her great-great- grandmother’s work in an area once nicknamed the “Black Wall Street of America.”

“This is a gathering place to complete the work that needs to be done in our community,” Ms. Mickens said.

She called the Walker statue and plaza “a fertile ground where other seeds have flourished because of the love we have sown into it.”

Mayor Stoney acknowledged the contentious debate that has led to the recent Monument Avenue Commission recommendation for removal of the monument of Jefferson Davis, president of the Confederate states.

He urged the crowd to not “focus on monuments that could divide” and, instead, use Mrs. Walker’s monument as a gateway to educate younger generations on Richmond’s history.

“We owe them a full story on the contributions of women like Maggie Walker,” Mayor Stoney said.

Some of Richmond’s youths already were ahead of the day’s speakers in continuing Mrs. Walker’s legacy of advocacy and outreach. More than a dozen graduates of the Maggie L. Walker Summer Youth Leadership Institute Class of 2018 were honored earlier that day at Mrs. Walker’s Jackson Ward home, a national historic site run by the National Park Service.

Recounting a summer of learning to an assemblage of friends and family at the site’s visitor center, leadership institute participant Kennedy Rhone, 14, a rising freshman at Fenway High School in Boston, said, “Maggie L. Walker will forever be a part of who I am because of what she was. She has made me proud to be a young scholar of color.”

The graduates’ experiences were on full display not just in their speeches, but in the final projects they presented to the guests, using statistics and mixed media to explore topics like immigration, gun control and poverty and how they impact Richmond area communities.

“It was about them finding their own voice and the issues that resonated with them,” said Ajena Rogers, supervisory park ranger at the Maggie L. Walker National Historic Site. “All we did was give them the tools and give them the opportunity to train and work with people they had never known before they came to the program.”

The historic site has seen a strong uptick in interest since the statue’s unveiling last year, with a 50 percent increase in visitors, including many from far beyond the East Coast, according to Acting Superintendent Andrea DeKoter.

“One visitor said to me, ‘This is the most inspirational story I’ve never heard,’ ” Ms. DeKoter said. “We’re getting the word out.”

As the celebration at Maggie Walker’s home began in earnest around noon, Ms. Rogers reminded guests and visitors to take Mrs. Walker’s legacy and apply it beyond the day’s events.