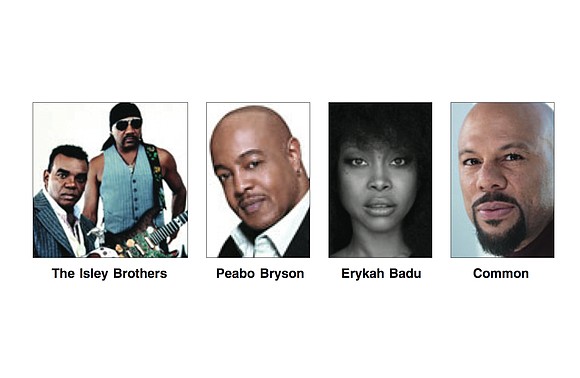 These are just a few of the jazz, R&B and neo-soul artists that will perform this year at the 8th Annual Richmond Jazz Festival at Maymont.

More than 24 performers are scheduled for the Aug. 10 through 13 festival that will culminate with outdoor concerts Saturday, Aug. 12, and Sunday, Aug. 13, at Maymont in the city’s West End.

Thousands of jazz lovers are expected for the event, which is sponsored by Altria.

This year, organizers are introducing CaRue, a prelude to the festival, featuring free, live performances by local and regional artists at venues around Carytown, including the Byrd Theatre. Those concerts will take place during the afternoons and evenings from Saturday, Aug. 5, through Thursday, Aug. 10.

The official festival kicks off Thursday, Aug. 10, with a free Jazz Café at the Virginia Museum of Fine Arts, 200 N. Boulevard, and music at the Hardywood Park Craft Brewery, 2408 Ownby Lane.

Friday, Aug. 11, will feature “Homegrown at the Hipp,” an array of local and national artists, including a special performance by bass player Nathan East, at the historic Hippodrome Theater, 528 N. 2nd St. in Jackson Ward. Tickets are $30.

In addition to music at Maymont, the festival will feature complimentary wine tastings by Ste. Michelle Wine Estates, chef demonstrations, artist meet-and-greets and food and other vendors from across the region.

A portion of the proceeds will benefit the Maymont Foundation and the Blue Stone Education Foundation.