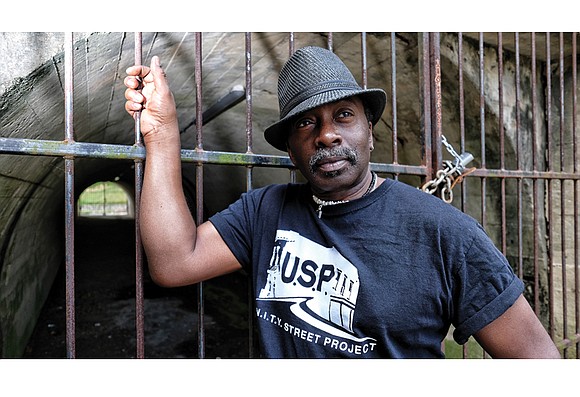 Sir James Thornhill stands at the end of the pedestrian tunnel in Battery Park where he will create murals honoring tennis star Arthur Ashe. The tunnel connects a basketball court to the tennis courts where Mr. Ashe practiced early in his career.

He calls it “my mission in life to use art to educate and elevate.”

With 25 such murals under his belt, the 61-year-old Richmond native is turning his sights on Battery Park.

Mr. Thornhill’s next big idea: To bring murals about Richmond great Arthur Ashe to the North Side park’s long-closed pedestrian tunnel that runs underneath Overbrook Road.

The tunnel connects the park’s basketball court with the tennis courts where the late tennis star and humanitarian began blossoming in the sport.

Mr. Thornhill said it took a year to win city permission for the $20,000 project that is being funded largely by donations.

The city Department of Parks, Recreation and Community Facilities, which operates Battery Park, is paying to clean, make repairs and light the 50-foot tunnel, he said.

The mural work is to begin next week, he said, under the banner of the UNITY Street Project that Mr. Thornhill created and leads to use art as a tool for community betterment.

He will be working with another well-known Richmond muralist, Hamilton Glass, to prep the tunnel walls on Monday, June 12, for two main murals of the late Mr. Ashe and the connecting timelines about his life and contributions.

Three other members of the UNITY team, David Marion, Michon Pittman and Keith Ramsey, also will participate in preparing the murals, he said.

The actual painting is to begin Tuesday, June 20, Mr. Thornhill said. That’s when 50 volunteers from a supporting corporation are scheduled to wield brushes.

Mr. Thornhill said members of the Battery Park Civic Association and the Richmond Tennis Association also are expected to participate in painting, as are Richmond Public Schools students, whom he said would get lessons in creating sketches for murals, mixing colors and the importance of public art.

The main murals include a portrait of Mr. Ashe and one showing him holding up his trophy after winning the 1975 singles title at Wimbledon in England.

Mr. Thornhill said while the project has received pledges of financial support from the Community Foundation and a major corporation that will cover more than half the cost, additional funds still are needed.

“We expect the project to be finished in two weeks and stand as a testament to Mr. Ashe, a world-class player and person,” he said. “Our hope is that the department will host tours for students and others to ensure he is not forgotten.”

Information and to participate in painting: Mr. Thornhill at sirjamesthornhill@gmail.com or (804) 908-3778.