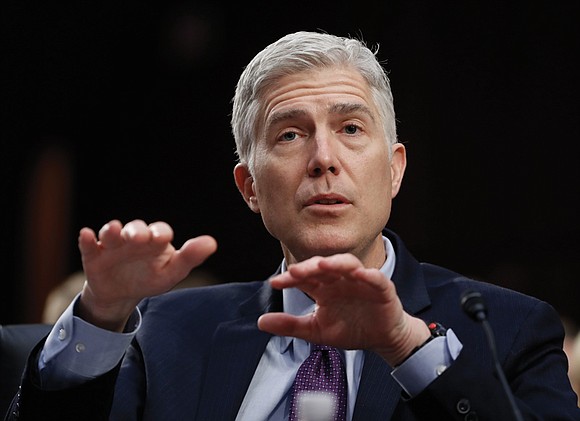 Judge Gorsuch, the conservative appeals court judge from Colorado nominated by President Trump on Jan. 31 to a lifetime job on the nation’s highest court, sparred with Senate Judiciary Committee Democrats on the third day of his confirmation hearing.

While his confirmation process appeared to be proceeding smoothly, Democrats pressed him on matters swirling around President Trump, even asking him about the standards for impeachment.

Judge Gorsuch’s expected Senate confirmation would restore a conservative majority on the Supreme Court and hand the Republican president his biggest achievement in office.

U.S. Sen. Patrick Leahy of Vermont cited comments by Trump adviser Stephen Miller after courts blocked the president’s executive action banning people from several Muslim-majority nations from entering the United States. On Feb. 12, Mr. Miller challenged the authority of courts to rule on the issue, saying the president’s power to enforce the ban should not be questioned.

“I’m a judge now. I take that seriously. And you better believe I expect judicial decrees to be obeyed,” Judge Gorsuch said. “That’s the rule of law in this country.”

The panel was set on Thursday to hear from outside witnesses opposing or supporting Judge Gorsuch. A committee vote is expected on Monday, April 3, before consideration by the full Senate.

Republicans hold 52 seats in the 100-member Senate. The Senate has a 60-vote hurdle for confirmation of U.S. Supreme Court justices, meaning Judge Gorsuch would need backing by eight Democrats. If Democrats stand together, Republicans could change Senate rules to allow confirmation by a simple majority vote.

Judge Gorsuch declined to say how he would approach an alleged violation of the Constitution’s Emoluments Clause, which prevents American officials from accepting gifts or favors from foreign governments without congressional approval.

“The question is: What exactly does that mean?” Judge Gorsuch said, noting there is ongoing litigation on the matter. “I have to be very careful about expressing any views.”

President Trump has been sued by ethics lawyers, who say his businesses have accepted payments from foreign governments in violation of the Emoluments Clause.

On the basis for which an official can be impeached, Judge Gorsuch said historically the focus has been on “high crimes” rather than “misdemeanors.” He said the number of criminal misdemeanors on the books has increased substantially since the Constitution was written in the 18th century.

A unanimous ruling on Wednesday by the U.S. Supreme Court justices who Judge Gorsuch would join, if confirmed, rejected legal reasoning he used as an appellate judge in a 2008 ruling against an autistic child who sought a public education more tailored to his needs.

The court ruled in favor of another autistic student who argued he was denied an adequate education. Democrats have called Judge Gorsuch’s earlier decision an example of how he rules against everyday Americans while favoring corporate interests, an assertion the nominee and his Republican supporters reject.

Judge Gorsuch said he was bound by court precedent in the 2008 decision, adding it would be “heartbreaking” to suggest he would like ruling against disabled students.

Judge Gorsuch seems assured of winning committee approval, moving his nomination to the full Senate. His challenge then would be to gather enough Democratic votes to avoid a prolonged floor fight.

Judge Gorsuch sidestepped answering whether he thought a series of contentious past cases had been decided correctly, including those on abortion, gun rights, political spending and religious rights.

“What worries me is you have been very much able to avoid any specificity, like no one I have every seen before,” U.S. Sen. Dianne Feinstein of California, the panel’s top Democrat, told Judge Gorsuch.

The document asked whether aggressive interrogation techniques used by the Bush administration had yielded valuable intelligence or stopped a terrorist incident, and Judge Gorsuch had written “yes.” He said he was merely doing what he was told by the administration. “My recollection of 12 years ago is that was the position that the clients were telling us,” he said.

Sen. Feinstein expressed concern about women’s rights and preserving legalized abortion, and asked Judge Gorsuch about his views as an “originalist” seeing the Constitution’s meaning as unaltered since its enactment despite centuries of societal change.

“No one is looking to return us to horse-and-buggy days,” Judge Gorsuch said.