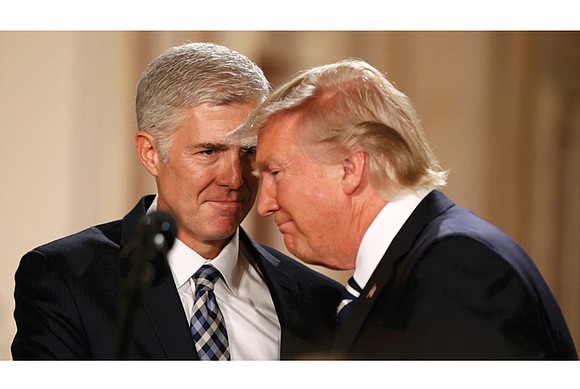 Just two weeks have passed since his inauguration, and despite a torrent of action, disruption, protests and lawsuits, President Trump has been on a tear to keep campaign promises, uplifting his legions of supporters and dismaying his legions of opponents.

Despite his condemnation of President Obama’s use of executive orders, the new president has rolled out a truckload of his own without any review by anyone outside his inner circle.

Already he has signed orders that halted immigration of Muslims from seven nations, including allies like Iraq, as well as green card holders with valid U.S. passports, and began to dismantle the Affordable Health Care Act, or Obamacare, that provides health insurance coverage for 20 million Americans.

Despite an unorthodox style, a penchant for making up facts, a lack of consultation with experts and lawyers, an unstinting desire to bash the press and critics, and nomination of a billionaire-heavy cabinet eager like himself to profit from government service, President Trump keeps rolling.

Nothing more exemplifies his push to fulfill his promises than his nomination Tuesday of a U.S. Supreme Court justice to fill the vacancy left by the death of archconservative Antonin Scalia a year ago.

His choice: 10th U.S. Circuit Court of Appeals Judge Neil Gorsuch, 49, of Denver, the youngest high court nominee in 25 years and another archconservative in the Scalia mold who has rejected controls on corporate spending in elections, promoted religion as a check on government policy and advocated for reducing the authority of federal agencies.

“I made a promise to the American people: If I were elected president, I would find the very best judge in the country for the Supreme Court,” the president said at the White House Tuesday night in introducing his choice in a national broadcast.

“Judge Gorsuch has outstanding legal skills, a brilliant mind, tremendous discipline and has earned bipartisan support,” President Trump said in pushing a judge who has disdained the underlying reasoning that supports the U.S. Supreme Court’s Roe v. Wade decision in 1973 that legalized abortions.

While Judge Gorsuch won unanimous Senate confirmation in 2006 to go on the appeals court, he could face a bruising fight from Senate Democrats who are eager for payback for the Republican decision to ignore former President Obama’s nomination last year of Judge Merrick Garland for the empty Supreme Court seat.

President Trump, aware of the prospect, already is calling on Senate Republicans to approve his nominee with a simple majority, rather than requiring 60 votes, a move dubbed “the nuclear option.” Currently, there are 52 Republicans in the 100-member Senate.

“Senate Democrats are ready for this fight,” he continued. “We’re going to demand an exhaustive, robust, and comprehensive debate on Judge Gorsuch’s fitness to be a Supreme Court justice. And just like President Obama’s Supreme Court nominees who all met a 60-vote threshold in the Senate, we’re going to insist on the same for this administration’s nominees.”

However, Sen. Schumer may not be able to avoid desertions from his fractured caucus, whose members have refused to march in lockstep to oppose Trump nominees.

Some Democrats already have bolted to vote with the Republicans for some of the president’s controversial cabinet picks, including Virginia Sen. Mark Warner who voted for President Trump’s secretary of state pick, Rex Tillerson, the former Exxon chief executive.

In the case of Judge Gorsuch, Virginia’s senators, Sen. Warner and Sen. Tim Kaine, have so far indicated they would engage in a careful review of Judge Gorsuch’s record on civil rights and other issues, but have made no commitment to vote against a jurist who many consider highly qualified despite his rulings.

Meanwhile, the blowback over the new Trump effort to ban Muslim immigrants continues to mount. From America’s largest tech companies to Virginia universities, condemnations have poured in, along with promises to protect students, professors, engineers and others who are affected. Some tech companies are saying they will consider expanding overseas instead of in the United States to ensure the free movement of their employees.

On Monday, Virginia Gov. Terry McAuliffe and state Attorney General Mark Herring blasted the Trump ban on immigration as “unconstitutional” and “un-American” and vowed to use legal means to overturn it.

Mr. Herring has sought to intervene via a federal lawsuit challenging the immigration ban as it involves Dulles Airport, an international entry point in Northern Virginia, particularly regarding legal residents who have been unable to return.

Everyone is now waiting for the next shoe to drop from a presidency built on creative destruction.

President Trump has made no secret of his top priority: To do what disgruntled voters sent him to Washington to do — blow things up.

“Think of everything we can achieve and remember who we must achieve it for,” President Trump told Republican lawmakers Jan. 26 in Philadelphia. “Now we have to deliver. Enough all talk, no action. We have to deliver.”

Among the promises he would say he has delivered are his orders to pull America out of the Trans-Pacific Partnership trade pact, rupturing decades of U.S. foreign policy orthodoxy that was projected through multilateral deals.

He also has hauled business and auto executives into the West Wing and warned they will pay a heavy price for manufacturing abroad and told pharmaceutical company leaders to cut drug prices while promising to speed up government approvals of new medicines.

He has upset relations with Mexico, America’s third largest trading partner, with his insistence that the border wall be built and that Mexico will pay for it, despite assurances from that country it would go to war first.

And he has ended decades of American efforts to try to work with Palestinians and Israel, which wasted no time in seizing on his taking office to launch construction of 2,500 new homes in West Bank settlements to expand its hegemony.

Ahead, the White House, congressional allies as well as many of his cabinet picks — often foes of the agencies they were selected to head — are promising big slashes in government regulations and hinting about big cuts in federal employee numbers.

Those close to the president believe that despite the uproar over his initial steps, the actions are being well received.

“If you are somebody sitting at home, you say, ‘Wow, there’s a lot going on here.’ The media bubbles on the coast are not the people Trump is talking to,” said a senior aide. “The people that Donald Trump is talking to are the thousands of counties that he won.”