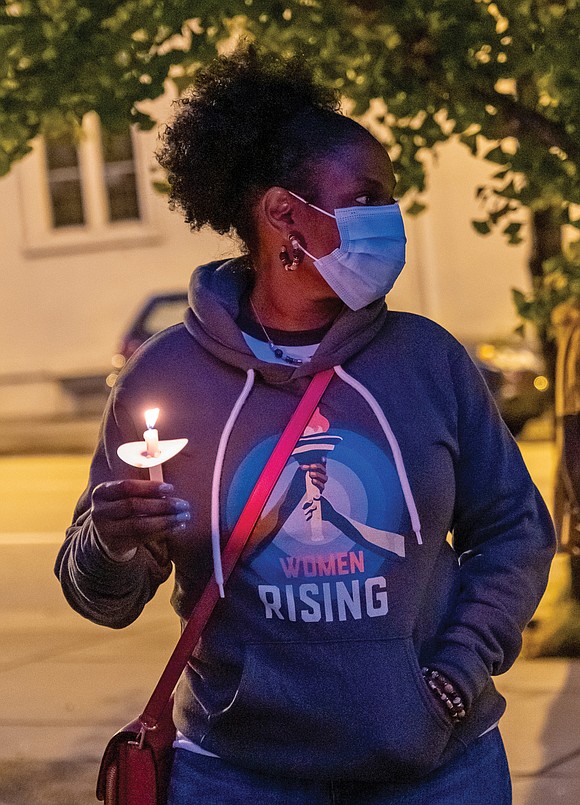 More than 100 people, including this mourner, attended a candlelight vigil Sunday outside the federal courthouse in Richmond’s Downtown to honor the life and legacy of Justice Ruth Bader Ginsburg. Photo by Sandra Sellars

Democrats in the U.S. Senate need to throw away any rule book, take off the gloves and get ready to rumble.

With the death last week of U.S. Supreme Court Justice Ruth Bader Ginsburg, the fight is on for her replacement and it’s going to be nasty.

If President Trump and his slim majority of GOP sycophants in the Senate get their way, they will ramrod through the confirmation process the next ultraconservative Supreme Court justice. With the court then stacked with conservative justices, we can kiss goodbye many of the legal protections that President Trump and the Republicans have been itching to gut — Obamacare, abortion rights, voting rights, LGBTQ rights and immigrant rights, just to name a few.

Throughout her legal and judicial career, including her 27 years on the nation’s highest court, Justice Ginsburg affirmed women’s rights. Because of her work, women can serve on juries, have credit in their own name and are protected from losing their job because of pregnancy. She pushed for equal pay for women and opened educational opportunities for women in writing the high court’s opinion in 1996 striking down state-supported Virginia Military Institute’s male-only admissions policy.

She has consistently supported abortion rights and voting rights, even writing the dissent in the seminal Shelby County v. Holder voting rights case in which the court’s conservative majority rolled back protections outlined in the 1965 federal Voting Rights Act that now allow states with a history of racially motivated voter suppression to change their voting procedures without any federal oversight.

She was considered by many as the last defense for social justice on a court that already has been stamped with Trump’s regressive imprimatur with the addition of Justice Neil Gorsuch in April 2017 and Justice Brett Kavanaugh in October 2018.

When President Obama sought to fill a vacancy on the Supreme Court following the February 2016 death of conservative Justice Antonin Scalia, he was blocked. Senate Majority Leader Mitch McConnell refused to hold confirmation hearings for President Obama’s nominee, Judge Merrick Garland, saying it was too close to the November presidential election.

That was 11 months before the November 2016 election. But the rationale used to block President Obama has suddenly evaporated, with Sen. McConnell and his sidekick Sen. Lindsey Graham rushing to confirm a new justice less than six weeks before a presidential election.

Yes, the Republicans are hypocrites. But that’s not news, and the Democrats crying about it won’t change the situation.

Senate Minority Leader Chuck Schumer and the progressive minds in this nation need to understand the conventional rules are gone in this high-stakes political quest to fill Justice Ginsburg’s seat. They need to strategize mightily and come up with action plans to block Trump’s nominee, who is expected to be announced by week’s end.

For too long, Democrats have expected logic and fair fights from the Republicans. But that has never happened in the age of Trump, which is ruled by lies, deception and brute force.

What’s needed is pressure – hard pressure – on the Republican senators such as Sen. Susan Collins of Maine, Sen. Lisa Murkowski of Alaska and at least two others.

But we should not stop there. It is time to draw the line. We, the voters, should not accept any more lies and gaslighting from conservatives with their toxic agendas. We also do not accept our Democratic representatives allowing the hateful Republican agendas to be normalized.

Democrats need to stand up or get out. They need to show the nation they will defend democracy, not surrender it. Otherwise we will find our nation returned to the old days that President Trump has longed for.