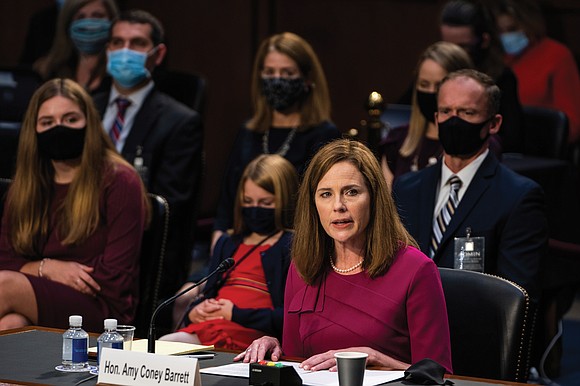 U.S. Sen. Lindsey Graham of South Carolina, who chairs the committee, has indicated he will seek to complete other procedural hurdles and hold a committee vote on Thursday, Oct. 22, to send her nomination to the floor.

And Senate Majority Leader Mitch McConnell of Kentucky has said he plans to bring the nomination to a vote of the full Senate as quickly as possible, which is expected to be held before the month ends.

The GOP holds 53 of the 100 seats in the U.S. Senate. And so far, only two Republicans, Sens. Susan Collins of Maine and Lisa Murkowski of Alaska have indicated they support waiting until after the Nov. 3 presidential election to have the vote.

At this point, that still leaves Republicans with a 51-vote majority, more than enough to ensure Judge Barrett, who currently serves on the 7th U.S. Circuit Court of Appeals for Illinois, Indiana and Wisconsin, will be seated.

Frustrated Democrats, who can count on 47 votes, can only participate in what some have called a sham process and a far different approach than in 2016, when the same Republicans halted President Obama from filling a U.S. Supreme Court seat on a claim such a vote should not be held in an election year.

For supporters of a woman’s right to choose, the nominee is a frightening choice as she could vote to overturn the 1973 Roe v. Wade ruling legalizing abortion nationwide.

“This is history being made folks,” Sen. Graham gloated as he welcomed the judge to the Senate committee hearings.

“This is the first time in American history that we’ve nominated a woman who is unashamedly pro-life and embraces her (Catholic) faith without apology, and she’s going to the court,” he continued.

“It will be a great signal to all young women who share your view of the world,” he said.

Under questioning by Sen. Graham, Judge Barrett, 48, repeated that the landmark case that recognized a woman’s constitutional right to abortion was not a “super-precedent” that could never be overturned.

Despite substantial evidence that she publicly supported an end to abortion, Judge Barrett told the committee she could and would set aside her religious beliefs in making judicial decisions.

She would be the fifth woman to serve on the nation’s highest court and the second Republican woman. And for Democrats, she is considered likely to do Justice Ginsburg’s legacy what Justice Clarence Thomas has done to Thurgood Marshall’s legal legacy — destroy it.

During the questioning, Judge Barrett sidestepped questions on contentious social issues and told the committee she had no agenda regarding the Obamacare health insurance program even though she scolded Chief Justice John Roberts for upholding the legality of a program she would have struck down.

Democrats said Judge Barrett would threaten health care for millions of Americans and that the Senate should not consider filling the vacancy until after the presidential election.