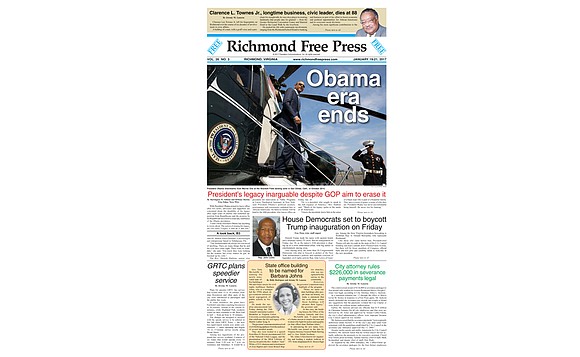 The newspaper was recognized with 11 awards, including four first place awards, at the annual Virginia Press Association competition in writing, photography, news presentation and advertising.

The contest for work published in 2017 was judged by members of the Alabama Press Association. Winners were announced April 14 during the VPA’s annual awards banquet at a Henrico County hotel.

Free Press staff photographer Sandra Sellars won first place in the photo illustration category for large, non-daily newspapers in Virginia. Her winning photograph was a Cityscape showing a series of 17-foot tall metal rings — public art — along the South Side walkway to the T. Tyler Potterfield Memorial Bridge across the James River.

“Amazing photo!” the judge wrote. “What really sets it off is the sky!”

Ms. Sellars also shared a first place award in the picture story or essay category with Free Press freelance photographer Clement Britt for a collection of 10  photos published with the article “Racists Go Home,” detailing how members of a Tennessee-based neo-Confederate group were met by hundreds of counterprotesters during their rally to support the Confederate statues on Monument Avenue.

“Besides the great photos,” the judge wrote, “the newsy aspect of this collection pushed it to the top of a VERY TOUGH category for me. The shot of the cops with a man in custody may have been the difference.”

The judge wrote, “The pages have eye-catching pictures and headings.”

And former Free Press freelance writer Holly Rodriguez clinched a first-place award for education writing. The judge provided no comment on the submission that included a range of education stories, including ones detailing the ouster of former Richmond schools Superintendent Dana Bedden.

• A Free Press team of Mr. Lazarus and freelance writers Ronald E. Carrington, Saraya Wintersmith and Leah Hobbs for general news writing for coverage of the Confederate statue issue in Richmond. The judge wrote, “An emotional issue covered from all sides. Good, sound and fair reporting.”

• Ms. Sellars for photo illustration; and

Meanwhile, VPA winner Ryan M. Kelly, a photographer for The Charlottesville Daily Progress whose image of a car plowing into a crowd of people demonstrating against white supremacists last August in Charlottesville was seen around the globe, won a Pulitzer Prize for breaking news photography for the photo.

Tim Eberly of The Virginian-Pilot newspaper in Norfolk was a Pulitzer finalist for investigative reporting for his series on Virginia’s “three-strike” prisoners who face unduly long sentences. His series led to changes in the Virginia Parole Board’s practices and freedom for several inmates.

Mr. Eberly was named Outstanding Journalist of the Year by the VPA during the banquet.