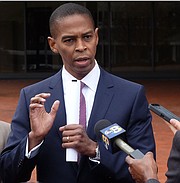 Richmond Commonwealth’s Attorney Michael N. Herring is aware that police officers are using the claim of “I smell marijuana” to justify pat-downs of people and car searches, particularly “in poor communities of color.”

In response to a Free Press query, Mr. Herring also stated that it is common for officers to testify in court about getting a whiff of that odor in explaining how they came to make an arrest.

He stated that he regards such odor evidence as “less reliable” than other kinds of evidence, adding that he and the city’s assistant commonwealth’s attorneys who try most cases “all recognize that it is a purely subjective observation by the officer.”

But he indicated such testimony usually is accepted at face value by his office.

Mr. Herring also declined to respond to a follow-up question about whether he has raised any red flags with city Police Chief Alfred Durham about patrol officers’ flagrant use of the marijuana smell excuse to stop people and whether RPD needs to consider whether this is a good way to go about community policing.

Chief Durham also did not respond to Free Press questions about the smell tactic, which appears to allow city officers to get around a 2015 U.S. Supreme Court decision limiting their ability to use a traffic stop as a reason to investigate other crimes.

By citing the smell of marijuana, officers can claim “reasonable suspicion that a crime is being committed” and search a person and a vehicle without a warrant.

Chief Durham has long complained about the failure of people to come forward with information to help detectives solve homicides and other crimes.

However, the marijuana smell pretext to search people and their vehicles also ignores its impact that allows officers to harass African-American drivers and pedestrians who are doing nothing wrong and who may later shy from assisting police in other matters, advocates say.

Indeed, there is anecdotal evidence that Richmond Police officers no longer find traffic violations as a means to stop people and, instead, are relying on the claim of smelling marijuana to make a traffic stop and conduct a search.

In a Richmond Police stop on Aug. 2 of community and gardening activist Duron Chavis, Mr. Chavis said the officers never suggested he had violated a traffic law in conducting a search of his vehicle. He said they relied solely on the “smell of marijuana” claim.

Details of the incident were reported in the Aug. 9-11 edition of the Free Press.

That’s also what happened to Ron Timmons. He caught a ride home with friends to his parents’ home in Carver, only to have a Virginia Commonwealth University police officer pull up with lights flashing to conduct a search of the vehicle. The officer claimed he smelled marijuana when the car passed him on a nearby street.

Mr. Timmons, 29, a youth outreach coordinator for St. Elizabeth’s Catholic Church, said the officer never said there had been a traffic violation.

“It was all about the smell of marijuana,” Mr. Timmons recalled.