QB ‘Taylor made’ for VUU 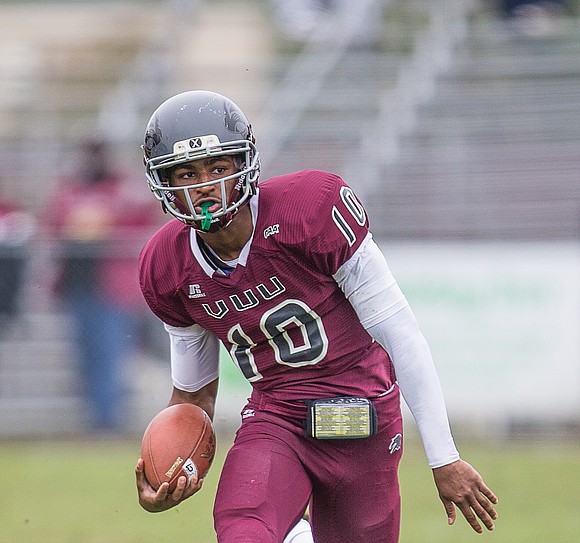 From someone who wasn’t even on the 2017 opening day roster, the Washington native emerged practically out of nowhere as one of the CIAA’s most prolific quarterbacks.

Now as a senior, Taylor is fired up and primed for an encore under the Panthers’ first-year Coach Alvin Parker.

College football, and all the pageantry surrounding it, is returning to Richmond’s North Side on Saturday, Sept. 1.

Nicknamed the Griffins, Seton Hill is a Roman Catholic school that was 0-11 last season. It is a member of the NCAA Division II Pennsylvania State Athletic Conference.

“It’s my second year here. I’ve worked out and trained hard. I think I can show a lot more,” said Taylor, 22, a 6-foot-5 criminal justice major.

Taylor proved to be rust- proof last autumn. He’d been away from the gridiron for two years and was nearly ready to hang up his shoulder pads when VUU called.

“I was almost done,” he said. “Really, it was mostly a couple of my old friends from D.C. who were at Union who talked me into giving it another try.”

You might say Taylor took the scenic route from Calvin Coolidge High School in Washington to VUU’s Lombardy Street campus.

He had a solid 2014 season at Monroe College in the Bronx, N.Y., alternating at quarterback for the junior college program. Then he dropped out of Monroe and returned home, sitting out both the 2015 and 2016 seasons.

Taylor arrived at VUU last season under Coach Mark James. But eligibility questions kept him off the roster until the second game of the season. He didn’t dress for the team’s opening loss at Long Island University.

Once questions were cleared up, he took off, wearing the No. 10 jersey for the maroon and steel.

There were big cleats to fill. Former VUU quarterback Shawheem Dowdy had passed for 4,500 yards and 42 touchdowns in 2015 and 2016 combined under Coach James.

The quarterback position was open last fall and the Washington transfer was “Taylor made” for the opportunity.

Coach Parker, a native of Washington, added, “He comes highly recommended. His high school coach was my youth league coach in D.C.”

Taylor is cool under pressure and quick-footed enough to avoid the initial pass rush. His best games in 2017 came against the CIAA divisional champs.

Taylor is a classic late bloomer. At Coolidge High School, he was 5-foot-3 as a freshman and still just 5-foot-11 as a senior. Recruiting was light.

“I’ve grown about six inches since high school,” he said. “When people see me for the first time in a long while, they say, ‘What in the world?’ ”

Then after nearly calling college and football quits, he arrived at VUU “just a couple of weeks before classes,” he recalled. It just goes to show it’s never too late.