City receives only one proposal for Coliseum replacement 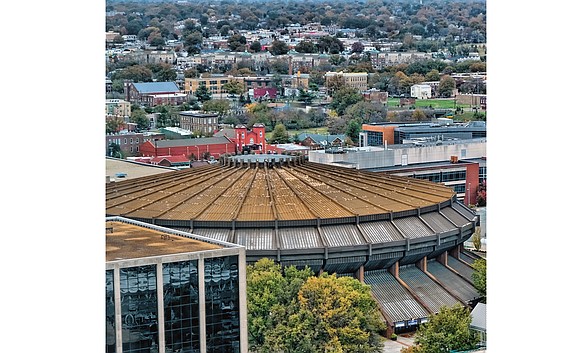 How much will it cost taxpayers?

That remains the unanswered question as City Hall moves to review the one and only proposal submitted to replace the 46-year-old Richmond Coliseum with a modern $200 million arena and tackle other development in a 10-block area around the building, including a new hotel and housing.

The Coliseum is located in the blocks bounded by 5th, 7th, Clay and Leigh streets.

Despite claims that developers across the country would be eager to take on this kind of big project, Mayor Levar M. Stoney announced that the sole response came from a local development group led by Thomas F. “Tom” Farrell II, chairman, president and chief executive officer of Richmond-based utility giant Dominion Energy.

The details of the proposal Mr. Farrell’s group has spent two years preparing were not made public in last Friday’s announcement. It came just days after the mayor won City Council backing to raise the city’s meals tax to pay for constructing possibly four new schools.

Mayor Stoney said city staff would go over the Coliseum proposal to determine “if it is in the best interest of the city.”

He expects that determination to be made within 30 days, and if it is positive, he said the city would work on crafting agreements to carry out the proposal and then send the documents to Richmond City Council.

The mayor, who is said to be eager to embrace the Farrell proposal, has sought to quell speculation that development of a modern 17,500-seat arena would require significant subsidy from the city.

In his announcement, Mayor Stoney said the city would not guarantee the debt repayment and that any city contribution to operations of the coliseum and other elements of the project would come from tax revenue increases that the full project would generate, not from existing resources.

However, similar arenas in other cities require major public subsidies to remain viable. According to several studies, big arenas do not generate enough income to cover their expenses, most notably operations and the repayment of money borrowed for construction.