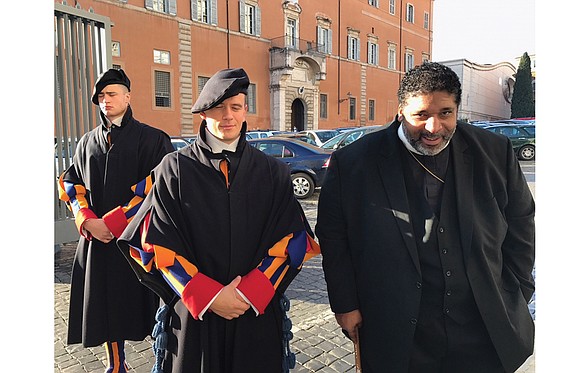 Rome is more than 4,600 miles away from Raleigh, N.C. But when it came to “Moral Mondays,” the massive yet peaceful demonstrations held in North Carolina’s capital city led by the former president of the North Carolina NAACP, no distance was too far as far as admirers attending a recent international conference on labor at the Vatican were concerned.

“I was … surprised by how many leaders from around the world had been inspired by Moral Mondays and the Poor People’s Campaign plans,” Dr. William J. Barber II, leader of the social justice group “Repairers of the Breach,” said by text from the Vatican shortly after the visit in late November.

Dr. Barber was one of 300 participants from around the world attending the conference, which addressed the conditions of working people and the working poor. Representing the upcoming Poor People’s Campaign in the United States, Dr. Barber’s social justice reputation from the 12 years he led the North Carolina NAACP preceded him. Already, he has been extended an invitation to attend and preach at another world gathering on labor rights and the poor in Liverpool, England, in June. He also has been invited to Brazil next year.

As a birthday present, Dr. Barber took his 84-year-old mother on the trip to Rome, along with his wife and one of his sons.

Dr. Barber said during an interview that the global delegations of deeply committed religious and labor leaders spent two “long, intense eight-hour days” working together. Delegations were from nations such as France, Sudan and England. Dr. Barber said he was greeted warmly by all.

Even the Vatican guards saluted him because of his title of “bishop.”

During his presentation at the conference, Dr. Barber noted that Pope Francis has said “religious leaders must play a leading role in the struggle for justice in dialogue with all social and political actors.”

“We must articulate a way of thinking that brings together the complexity of the current situation and proposes an action strategy for the construction of a just society,” Dr. Barber said. “Not only is democracy at stake, but the well-being of the world itself.”

Dr. Barber told the gathering that five “moral diseases” must be addressed “if we are to be a people able to address the common good, promote the general welfare and ensure the common defense, with liberty and justice for all.”

“We must address systemic racism, systemic poverty, ecological devastation, the war economy and the immoral narrative of extreme religionism,” he said.

Dr. Barber said many of the points he and the delegation raised were included in the conference’s final document “as a guide to the way forward.”

His Thanksgiving Day meeting with Pope Francis, however, was canceled at the last minute because of challenges surrounding the pope’s trip to Malaysia and security risks.

Pope Francis issued a letter at the conclusion of the international conference warning participants of “the money god” that leads to the exploitation of the working poor globally.

“Work must serve the human person,” Pope Francis said, not the other way around.” He added that “…every worker is the hand of Christ who continues to create and do good.”

Dr. Barber presented one of the Vatican cardinals with gifts for the pope from the United States — a small stone from the home of the late North Carolina civil rights leader Ella Baker and sand from the Rio Grande along the U.S.-Mexico border, where Dr. Barber walked with families traveling to see relatives from Mexico they had not seen in years.