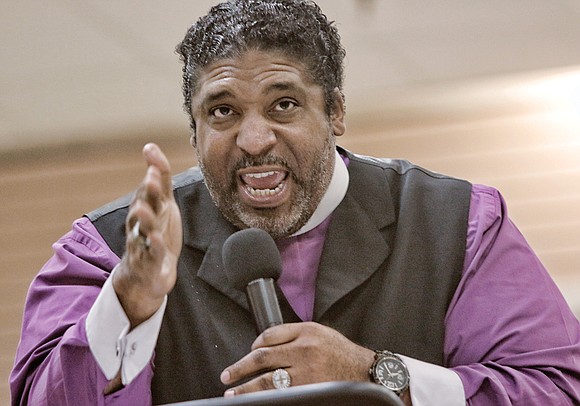 Special to Trice Edney News Wire from the Wilmington Journal

Although he insists that he’s “really not leaving,” the Rev. William J. Barber II, the nationally known activist and president of the North Carolina State Conference NAACP, said he will be “transitioning” from the state presidency next month to join a national “poor people’s campaign” to address issues of poverty and social inequality.

“I’m not going to run for another term (as president) of the North Carolina NAACP, and I will step down in June,” the civil rights leader said last week during a teleconference.

Maintaining that the North Carolina NAACP is “strong in our legal victories, strong in our organizational structure, strong financially and strong in the clarity of agenda,” Rev. Barber expressed confidence that the next state president, who is expected be selected from among the organization’s four vice presidents, will be up to the task.

Rev. Barber has been president of the North Carolina chapter, the largest in the South, since 2005. He led the once troubled conference into national prominence with weekly Moral Monday demonstrations at the North Carolina state legislature since 2013, and challenged the state on controversial cases of racial injustice, including voting rights, economic justice and increasing the minimum wage, criminal justice and environmental issues.

The key to Rev. Barber’s success has been his ability to lead diverse racial and religious coalitions to demand change on issues ranging from equal education to affordable health care. Subsequently the Christian leader was invited to 23 states last year to do “moral revival” training, sparking Moral Monday demonstrations as far away as Chicago.

In recent years, Rev. Barber has been recognized as a key voice in the progressive movement nationally. He has been key in interviews with national media and was asked to address delegates during the 2016 Democratic National Convention in Philadelphia. He provided the keynote sermon at Riverside Church in Harlem last month commemorating the 50th anniversary of Dr. Martin Luther King Jr.’s April 4, 1967, “Beyond Vietnam” address.

His numerous appearances across the country gradually fueled speculation that Rev. Barber was seeking a national leadership role. He has confirmed that he will be “following a deep calling” and “transitioning to an expansion of the work around the country.”

“We found that there is a deep hunger for a shift in our moral narrative in the nation, and I’ve been asked by a number of moral leaders and impacted persons and advocates to join with them in helping to bring some leadership, energy and unity to helping to build the poor people’s campaign, and a national call for a moral revival.”

Rev. Barber said the campaign will focus on 25 states and the District of Columbia, with at least half of them in the South, culminating with the 50th anniversary of Dr. King’s 1968 Poor People’s Campaign.

“In the times in which we live, our country still needs to address the issues of systemic racism, poverty, the war economy and militarism and our national morality,” Rev. Barber said. “We need a moral narrative.”

Rev. Barber said he will remain a member of the North Carolina NAACP chapter and on the national NAACP board. He will not leave his church, Greenleaf Christian Church, in Goldsboro, N.C. The church, he said, keeps him in close touch with the needs of the people.

He will join the national effort under the banner of his own social justice group known as “Repairers of the Breach.” His organization will partner with the Kairos Center for Religions, Rights and Social Justice at Union Theological Seminary in New York City and other social justice and theologian activists to sponsor “The Souls of Poor Folk: Auditing America 50 years after the Poor People’s Campaign Challenged Racism, Militarism, Poverty and Our National Morality.”

“In 1968, the Rev. Dr. Martin Luther King Jr. and others knew the nation needed a Poor People’s Campaign to challenge extremism,” Rev. Barber said. “Today, we recognize that in order to challenge the extremist policies that are being proposed at the highest levels of government, which hurt the most vulnerable, we need a Moral Revival Poor People’s Campaign. We must advance a moral movement in America, that can move beyond the limited language of left versus right politics.”