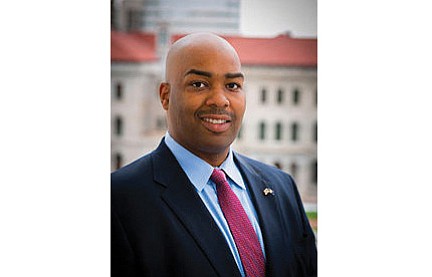 The 41-year-old director of operations for the Peter Paul Development Center from the 74th House District has represented the people of Charles City County and parts of Richmond and Henrico County since 2015.

In his added role as chair of the Virginia Legislative Black Caucus, Delegate Bagby will be representing the interests of an even larger constituency when the General Assembly starts on Wednesday, Jan. 10.

As leader of the 20-member caucus, Delegate Bagby will work to uphold the VLBC’s mission “to improve the economic, educational, political and social conditions of African-American and other underrepresented groups” and to use the “political and legislative process to influence change.”

“Our mission is to be the voice for the voiceless and those individuals on the margins across the commonwealth,” Delegate Bagby says. “This has been the group’s founding fathers’ passion and legacy.”

With all 20 members of the caucus being Democrats, and in a political position in 2018 to make changes during the legislative session, Delegate Bagby says the VLBC will focus on expanding health care for Virginians through Medicaid, boosting funding and other support for public schools and working for the restoration of voting rights and other rights for felons.

“It is time once and for all to make the restoration of rights an automatic process,” Delegate Bagby says. “This is an issue we will not lose sight of until it is done.”

He says Gov.-elect Ralph S. Northam is behind the effort to expand health care for the working poor and uninsured. “What we call it is not as important as the substance and how many individuals we can potentially add on to the health care rolls,” he says.

He talks about the link between education and housing and the need for a strategic approach for more affordable housing in areas across the state.

“Placing affordable housing in mixed-income areas is a good strategy,” Delegate Bagby says. “Continuing down that road by providing revitalization dollars for these housing communities is going to be critical. This will also improve the quality of education for prospective community schools and school systems.”

Another priority for the VLBC is to increase minority entrepreneurship and access to state contracts and procurement across the commonwealth.

“The caucus must be at the table and have an impact on negotiations and help minority companies get an economic boost through state contracts,” Delegate Bagby says. Unfortunately, many African-Americans don’t know about many of the resources that exist to help business owners, he says, and some black-owned companies “have been denied access to those dollars” and contracts. The caucus wants to change that.

“We are here to make sure all Virginians, especially African-Americans, have economic equity, housing and a quality education,” Delegate Bagby says.

Occupation: Educator and member of the Virginia House of Delegates representing the 74th District.