Commission recommends removing Confederate president’s statue, but not others 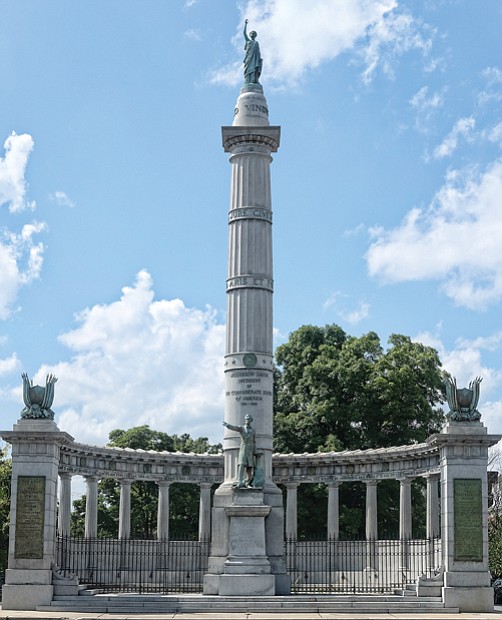 Baltimore, New Orleans, Louisville, Ky., and even Memphis, Tenn., have gotten rid of their statues of racist Confederate traitors who fought to keep black people enslaved.

So have 26 other cities.

But Richmond will not join them in removing those in-your-face symbols of white supremacy and black suppression.

Instead, it expects to keep them in place to influence future generations.

At least, that’s the recommendation from the ten-member Monument Avenue Commission that Mayor Levar M. Stoney set up last June to consider what to do with the statues with which Richmond has been identified for more than a century.

Capping an 11-month study, the commission led by Christy Coleman, CEO of the American Civil War Museum, and Dr. Gregg Kimball of the Library of Virginia, issued a 115-page report Monday laying out its proposals.

While the commission did call for removing the monument to Confederate President Jefferson Davis, it made clear that the city would need to clear a series of legal hurdles, including changing the city’s master plan.

“Of all the statues, this one is most unabashedly Lost Cause in its design and sentiment,” the commission wrote, referring to the post-Civil War movement to erect statues and create reverence for Confederate losers while erecting Jim Crow segregation laws and barriers to voting to keep black people as third-class citizens.

The Free Press, which has called for the removal of the statues, had predicted last year that the commission would call for signage. In a June 29, 2017, editorial after the commission was appointed, the Free Press decried the idea of putting “signs, historic markers or additional statues of the towering racists on horseback would be an affront … It would be like putting lipstick on a pig. It doesn’t work, and it isn’t pretty.”

Mayor Stoney praised the commission for its work and said he would study the report before moving forward with proposals to carry out the ideas of the commission, which is a study group without authority. The City Charter hands responsibility for statues to the Planning Commission and one of its arms, the Public Art Commission.

“Richmond has a long, complex and conflicted history, and the Confederate statues on Monument Avenue represents a shameful part of our past,” Mayor Stoney stated in responding to the report’s release.

“As I have said before, the statues on this beautiful street are Lost Cause myth and deception masquerading as history. They are monuments to Jim Crow that do not reflect the qualities of diversity, tolerance and equality we celebrate as values in our city today.

In his view, “the Commission’s report is unequivocal in its affirmation that there is an overwhelming desire and belief (that the statues) should not remain as they currently are. Something needs to change, and I could not agree more.”

Last year, after forming the commission, he had said he could support removal of the statues, but he has made it clear that any proposals he makes would follow the commission’s recommendations, even though they are not binding.