There’s a heaping measure of ridiculousness in Mayor Levar M. Stoney’s appointment of a Monument Avenue Commission to put the statues along the street in context.

We ask Mayor Stoney, the commission and our readers: What context can possibly change the statues’ meaning and message from what was meant when they were erected following a bloody Civil War fought to keep black people in bondage? And what can possibly change their present context as tributes glorifying racist, un-American traitors who chose to break off from the United States of America and start a war of secession rather than acknowledge the freedom and humanity of people of color?

Richmond and the mayor should be ashamed.

No statues of black heroes and freedom fighters in Virginia — such as Nat Turner, Gabriel Prosser, Henry “Box” Brown or Harriet Tubman, who worked after the Civil War as a matron at the Freedman’s Hospital at Fort Monroe in Hampton — can be put up in the shadows of Confederate traitors Robert E. Lee, Stonewall Jackson, J.E.B. Stuart and Matthew Fontaine Maury to make Monument Avenue less offensive to residents and visitors of Richmond.

Simply placing signs, historic markers or additional statues at the feet of the towering racists on horseback would be an affront to the memory and contributions of those who are being used to counterbalance a racist narrative. It would be like trying to put lipstick on a pig. It doesn’t work and it isn’t pretty.

Mayor Stoney, members of Richmond City Council and other elected officials need to grow the political courage and will that others across the country have shown and simply decide to take the statues down.

The Charlottesville City Council took the bold and right-minded action of voting to remove its statues of Lee and Jackson from its city parks. Now, it must face current day Confederates in court who are seeking to block the removal of those they still venerate.

As we know, the Ku Klux Klan is marching in Charlottesville in early July to show support for the statues. Such a demonstration clearly indicates that these statues hold a meaning of white supremacy today for their supporters, many of whom are hooded cowards who despise African-Americans, Jews, Catholics, immigrants and other people of color.

Following the June 2015 massacre of nine African-Americans at Emanuel AME Church in Charleston, S.C., the Southern Poverty Law Center launched an effort to catalog and map Confederate place names and other symbols in public spaces, both in the South and across the nation. The study, while far from comprehensive, identified a total of 1,503 such Confederate symbols. They include:

Since then, at least 60 such publicly funded symbols of the Confederacy have been removed or renamed. New Orleans, St. Louis, Louisville and Baltimore have removed or soon will remove their monuments to the Confederacy.

The SPLC undertook its review, in part, because the 22-year-old convicted shooter, an avowed white supremacist, said he launched the attack to spark a race war. Shortly after the mass shooting, photos surfaced of the perpetrator with the Confederate flag. Communities then began to re-evaluate the public display of Confederate symbols.

Debates are raging in Southern cities, including Memphis, about removing Confederate statues even as state lawmakers followed Virginia and other states in passing legislation to protect them.

In late May, Alabama Gov. Kay Ivey signed into law the Memorial Preservation Act, which provides sweeping protections for Confederate and other historic monuments. Supporters say they want to protect history — the good and the bad.

That’s like putting up a monument to the KKK and saying it deserves to be there because it is merely history.

Monuments symbolize what we choose to value. Do we, in Richmond, really want the world to think we value people and a skewed way of life that had little value for black lives?

Richmond is better than that.

We renew our calls for Mayor Stoney and the City Council to simply remove the statues. Let those who want them pay to move them to a museum, or use federal dollars to move them to a National Park battlefield site where they can be placed in true context.

And we call again for Gov. Terry McAuliffe and the General Assembly to remove or rename the state holiday named after the Confederate traitors Lee and Jackson.

It’s time for Richmond and Virginia to heal and move on. 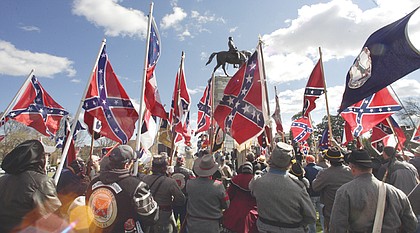 A 2012 rally at the Robert E. Lee statue on Richmond’s Monument Avenue.