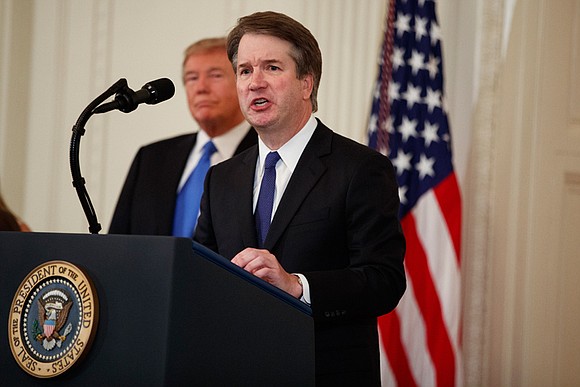 Brett M. Kavanaugh, 53, promises to be an independent justice who would keep “an open mind in every case” in accepting President Trump’s nomination to be a justice on the U.S. Supreme Court. A judge on the U.S. Court of Appeals for the District of Columbia, he was introduced Monday night at the White House as the president’s choice to replace retiring Justice Anthony Kennedy, 81. Evan Vucci/Associated Press

Judge Kavanaugh would not immediately change the ideological breakdown of a court that already has a 5-4 conservative majority, but nevertheless could move the court to the right. Justice Kennedy sometimes joined the liberal justices on key rulings on such social issues like abortion and gay rights, a practice his replacement may not duplicate.

Judge Kavanaugh has amassed a solidly conservative judicial record since 2006 with the 300 opinions he has written since joining the D.C. court, the same court on which three current justices previously served, including Chief Justice John Roberts.

“My judicial philosophy is straightforward: A judge must be independent and must interpret the law, not make the law,” Judge Kavanaugh said after accepting the nomination Monday at the White House.

Judge Kavanaugh survived a three-year confirmation fight to get on the appeals court.

Meanwhile, Republicans are hoping for votes of support from several Democratic senators facing re-election this year in Republican-leaning states, including Sens. Joe Manchin of West Virginia, Joe Donnelly of Indiana and Heidi Heitkamp of North Dakota.

The new justice can be expected to cast crucial votes on matters of national importance including gay rights, gun control, the death penalty and voting rights.

The court could also be called upon to render judgment on issues of personal significance to President Trump and his administration, including matters arising from Special Counsel Robert Mueller’s ongoing Russia-related investigation and several civil lawsuits pending against President Trump.

People are now combing through his opinions, which have a consistent business-first, citizens-last ring, according to legal scholars.

In 2016, he wrote the appeals court decision that found unconstitutional the structure of the Consumer Financial Protection Bureau, which was formed under President Obama to stop banks and other powerful corporations from gouging ordinary people.

In 2011, he dissented as the court upheld a District of Columbia gun law that banned semi-automatic rifles, opining that such weapons of war are open to citizen ownership under the U.S. Constitution’s Second Amendment

Last October, he was part of a panel of judges that issued an order preventing a 17-year-old undocumented immigrant detained in Texas by U.S. authorities from immediately obtaining an abortion. That decision was overturned by the full appeals court, and she had the abortion.

Judge Kavanaugh wrote in a dissent that the full court was embracing “a new right for unlawful immigrant minors in U.S. government detention to obtain immediate abortion on demand.”