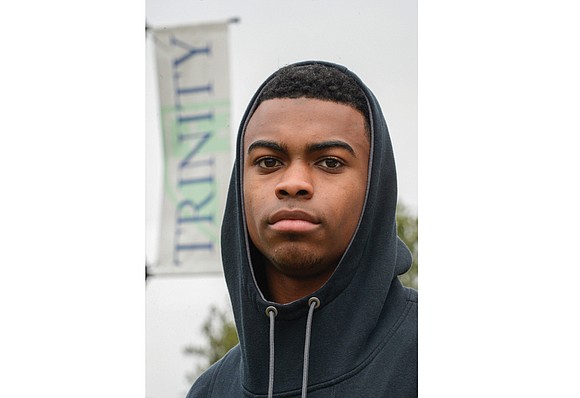 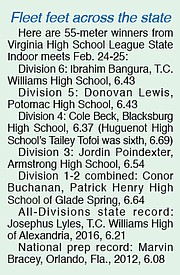 In so doing, Goode avenged a loss to Fork Union Military Academy’s Ebruba Etta in the Prep League finals.

“Donavan broke through to another level at states,” said Trinity Coach Ned Fischer. “Taking almost two tenths of a second off one’s best time is unheard of.”

To upset the taller, longer-striding Etta, Goode executed a well-crafted strategy to explode out of the starting blocks like never before. Mission accomplished, he was off like a flash.

“I got a near perfect start at states,” Goode said. “Still, I could hear him (Etta) coming, so I pushed harder.”

Etta came in second in 6.43, followed by St. Christopher’s Frank Royal in 6.58. Royal won the state long jump with an outstanding 23-5 mark.

Residing in Chesterfield County’s Cosby High School district, Goode looms as a powerful statewide contender in both the 100- and 200-meters this spring outdoors.

While his latest honors have been wearing spikes on the running track, Goode said, “My first love has always been football.”

On the youth level, he helped the Clover Hill Association to the Super Bowl final of the Chesterfield Quarterback League.

He took a year off from football as a Trinity junior, but returned this past fall with a vengeance.

As a tailback, Goode ran for 1,020 rushing yards and seven touchdowns, including a 90-yard sprint against Woodberry Forest and a 60-yarder against Norfolk Academy.

He hopes to pursue football on the college level, with track on the backburner.

Donavan’s uncle, Eric Goode, played defensive back at the University of Richmond and is credited with a 10.7 second 100-meter dash while at Northwestern.

His grandfather, Ed Goode Sr. of Chesterfield, is a former athlete in Washington.

Goode’s 6.39 was the best among private school sprinters; only Blacksburg’s Cole Beck (4A champ at 6:37) was faster in the public schools’ 6th division.

With a lone exception, “Beep, Beep” left them all behind.