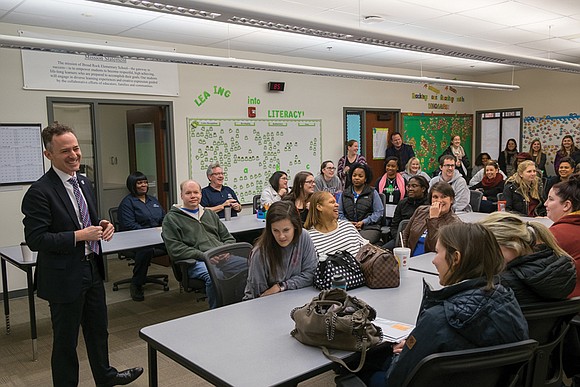 Above, Superintendent Jason Kamras leads an early morning discussion with teachers and staff at Broad Rock Elementary School on Feb. 9, assuring the group that he will stay in the job until his contract ends in 2021. Later that morning. Photos by Christopher Smith

He has been active identifying and supporting other funding sources to increase dollars for school construction and maintenance, whether it is through the city meals tax hike that goes into effect July 1 or a City Council member’s proposal, although unsuccessful, to levy a cigarette tax in the city.

He gives City Council credit for passing the 1.5 percent meals tax hike and applauds them because “that took some political courage and it is a significant amount of funding that will help RPS begin to address the process of remediating facilities’ issues.”

At the May 7 School Board meeting during a budget review, Mr. Kamras noted that RPS has only $850,000 left in the current budget for school repairs and maintenance, while $30 million is needed.

“I have publicly advocated the need to look at property taxes and other broader based taxing sources to ensure that RPS has the funds necessary to provide all of our students in every part of our city with a beautiful, clean, healthy, modern facility to learn in,” Mr. Kamras said during the interview. “That’s basic. That’s the foundation.

“The reality right now is that we do not have the money we need to either rebuild our schools or to do the routine maintenance that needs to be done,” he continued. “I don’t know how much more clearly I can say that.”

During the May 7 meeting, the School Board approved Mr. Kamras’ plan for collaboration between RPS and the city to construct four new schools buildings to replace aged and decrepit George Mason and Greene Elementary schools, Elkhardt-Thompson Middle School and George Wythe High School.

The four projects are to be financed through the meals tax increase. The $9 million the tax hike is expected to generate annually would be used to repay the construction debt on the estimated $150 million project over the next five years.

Mr. Kamras is eager to work with Mayor Levar M. Stoney and the City Council to find resources to put pending facilities issues to bed once and for all “so we can stop talking about bricks and start talking about books,” he said.

“It is my responsibility to paint the RPS vision, and that vision will be in the form the strategic plan,” he noted.

Despite the school system’s array of problems, Mr. Kamras is optimistic about turning things around.

“Once we have the RPS strategic plan in place, I will be out selling the plan, first and foremost to the city and the state, but also to the business community, the nonprofit community, to our partners,” he said with confidence. “This will show the city and the entire Richmond community how they can be a part of the RPS vision for the future.