‘Integrity is what you do when no one is watching,’ actress tells VUU grads 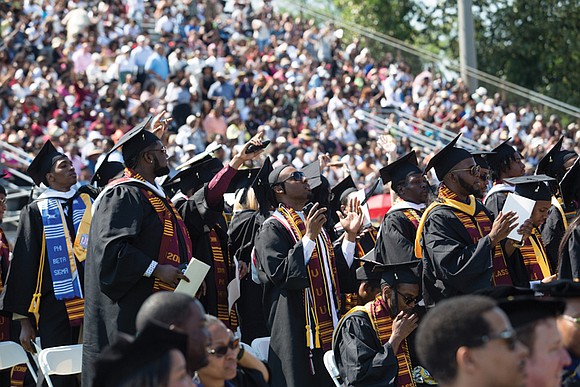 Virginia Union University graduates were encouraged to focus on a life of substance, and not one of superficiality, during the school’s 119th commencement last Saturday at Hovey Field on the campus.

Actress Keshia Knight Pulliam, best known for her role as Rudy Huxtable on the popular, long-running television sitcom “The Cosby Show,” gave a heartfelt talk to the more than 300 graduates and their families and friends in what she acknowledged was her first-ever commencement address.

“This is very special and dear to my heart. I am proud that you would put this trust in me,” said the 39-year old Ms. Pulliam, who graduated in 2001 with honors from Spelman College with a bachelor’s in sociology and a concentration in film.

She confessed that she had no recollection of who spoke at her graduation but promised that she would make every effort to be relevant, memorable and brief.

“I know you want to ‘turn up’ and celebrate with family and friends. And I don’t know how long this pressed hair is going to hold up,” she joked with the audience, many of whom had begun seeking shade under the bleachers at the outdoor stadium to escape the hot morning sun.

Ms. Pulliam, an NAACP Image Award winner whose recent acting projects include “Madea Goes to Jail” and “Tyler Perry’s House of Payne,” went on to identify the personal qualities she said she has adopted to further her development and success. Among them: To be authentic, to practice humility and to operate with integrity.

“Integrity is what you do when no one is watching,” she said.

The Atlanta resident did not talk about her personal life – she was divorced recently from former NFL player Ed Hartwell and awarded custody of their year-old daughter. Nor did she talk about her TV dad and mentor, Bill Cosby, 80, who was convicted April 26 in a Pennsylvania court of drugging and raping Andrea Constand, then a 30-year-old director of operations for the women’s basketball team at Temple University, in 2004.

Ms. Pulliam accompanied Mr. Cosby to court last June during his first trial, which ended in a hung jury. But she did not go to court to support him during the recent retrial, which was considered the first big trial since the #MeToo movement’s national spotlight on sexual assault and harassment. Mr. Cosby, who remains free on bond until his sentencing this summer, faces up to 30 years in prison.

Ms. Pulliam, however, praised the #MeToo movement in her talk, along with other advocacy and activist movements including Black Lives Matter. “All lives matter, but as African-Americans, we are excluded from the list.”

She concluded her address by driving home the point that real success is not solely measured in dollars and cents.

“Decide now how you will pay it forward in the work you choose,” she said. “Follow your passions and the money will come.”

In addition, VUU conferred three honorary degrees during the ceremony.

Dr. Sedgwick V. Easley, a VUU alumnus and pastor of Union Baptist Church in Hempstead, N.Y., was awarded an honorary degree for his dedicated service and commitment to pastoral and community leadership.

Edward B. Titmus, president of the Titmus Foundation, a philanthropic organization based in Dinwiddie County that focuses on Christian higher education, was awarded an honorary degree for his commitment and dedication in contributing resources to improve and make a difference in the lives of those in the community.

The university also awarded an honorary degree posthumously to Raymond H. Boone Sr., the founder and late publisher and editor of the Richmond Free Press.

Dr. W. Franklyn Richardson, chairman of the VUU Board of Trustees, said Mr. Boone changed the journalistic landscape of Richmond when the inaugural edition of the Free Press hit the streets on Jan. 16, 1992. He described Mr. Boone as a “bold leader and crusader for justice” who used his journalistic voice to promote equality with justice and opportunity for all people.

Dr. Richardson went on to recognize Mr. Boone’s excellence in leading the Richmond Free Press for 22 years until his death in 2014, and praised his widow, Jean Patterson Boone, the current president and publisher of the Free Press, for keeping the newspaper as a weekly fixture in the community with a growing circulation and a readership of more than 135,000.