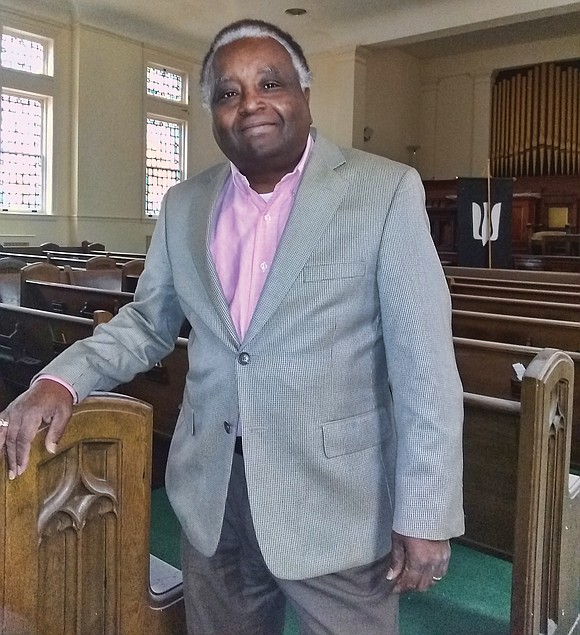 John S. “Johnny” Walker is optimistic about the future of All Souls Presbyterian Church on Overbrook Road despite a dwindling number of congregants at the church founded in 1952. Jeremy M. Lazarus/Richmond Free Press

John S. “Johnny” Walker is on a mission to save All Souls Presbyterian Church as a center of faith and tolerance in North Side.

Despite a shrinking congregation that has fallen to 40 contributing congregants, the 64-year-old Richmond native still sees a future.

“So long as two are gathered here, this will be church, and I’ll be one of them,” he said with steely determination.

All Souls is not unusual in seeing a membership decline. Church-going habits are far less engrained these days, and many older churches, particularly those of mainstream denominations, have felt the impact.

Across Richmond, numerous churches have closed their doors, with the buildings sold or donated to other churches or turned into apartments and condos.

Mr. Walker, a retired AT&T lobbyist and former Richmond City Council candidate, is intent on keeping All Souls from sharing that fate. He is focused on finding new members to come to a church with a progressive outlook.

His determination to save the church at 19 Overbrook Road is partly because of his personal ties. His parents were among the church’s original members, he was christened there and he has served in leadership roles, including treasurer and elder, for much of his adult life.

He also doesn’t want to close a church that he believes “is needed more than ever” in an era when racial discord is on the upswing.

Mr. Walker notes that All Souls welcomed black and white members from its founding in 1952 at a time when government laws and behavior enforced racial separation in virtually everything else in Richmond — from schools, libraries and YMCAs to jobs, neighborhoods, cemeteries and bus and theater seating.

During the 1960s, its pastor, the Rev. James Carpenter, served as an advocate for civil rights and improving race relations as a member of City Council.

Mr. Walker said that he and the four other elders, Eunice Evans, Geraldine Horne, Delores Murray and Charles Walker, agree that the church needs to revive the founding spirit of tolerance and openness and spread that message if it is to gain some of the newcomers who have moved into the area in recent years.

Mr. Walker left All Souls in 2005 to join a West End congregation, but he started getting involved again after receiving calls from members. Initially, he agreed to resume his previous role as treasurer as the church raised critical funds in 2016 to replace a leaking roof.

He renewed his commitment to All Souls in May 2017 as the dwindling congregation met to consider the future of the church that was once a center of Barton Heights, home to community Girls Scouts and Boy Scouts troops and other civic endeavors.

Mr. Walker won majority support to keep the building open by arguing that all was not lost.

“I told them that we’re still in good financial shape,” he said, with the building being debt free and structurally sound after the roof was repaired.

He remains optimistic. He found a Baptist minister, the Rev. Reuben Turner, to officiate and preach at the weekly services, except for communion, and also gained the support of retired school music teacher Haywood McCallum to play during services.

Still, it is an uphill struggle. Sunday services attract fewer than 20 people, he said, resulting in a monthly scramble to pay the operational bills.

To help, the church has rented some of its vacant space to a nonprofit ministry, Into the Neighborhood, which seeks to help people re-establish themselves after they return from jails and prisons.

A bike shop also has rented the chapel, but that is about to end. Mr. Walker said he and the four other elders have decided that the shop would need to find more appropriate space outside All Souls, and instead are hoping to fill the chapel with a smaller church that needs more space.

Mr. Walker goes to the church several times a week.

“We’re going to do what it takes,” he said. “This church is still needed and our members are still committed to ensuring that its doors remain open.”