City Councilman Jones proposes to girlfriend — and she said … 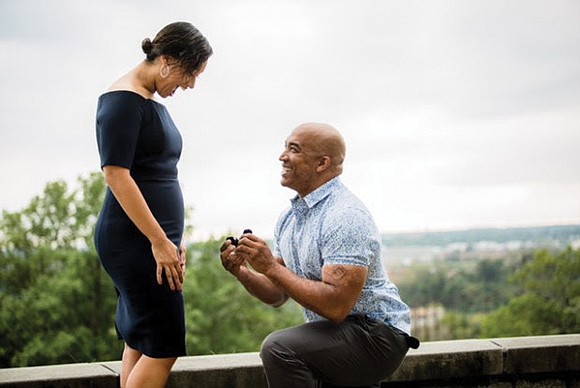 The full-time pastor of the Village of Faith church recently popped the question to his girlfriend, June Cober, director of promotions for Atlantic Records, and she said, “Yes.”

Dr. Jones said the couple plans to marry next spring, though a date has not been set. Both have been previously married.

The 51-year-old Portsmouth native said he surprised Ms. Cober, 39, with the proposal. He talked Ms. Cober into going to Chimborazo Park on Sept. 22 to watch the making of a video to promote an upcoming church event.

Dr. Jones said he arranged to have it look like a video shoot was taking place.

“Then I went off script and proposed,” he said. That was the real reason the video crew was there: To get the proposal on tape.

“We are tremendously blessed to find love and are super excited about taking on the world together,” said Dr. Jones, who was first elected to Richmond City Council in 2016.

Dr. Jones and Ms. Cober met years ago, but went their separate ways, he said. About two years ago, they met again through social media and found out each other was divorced.

“I fell in love with Mike as a cheerleader for the work he does in the community and all he represents,” said Ms. Cober, who has worked with Dr. Jones on many of the philanthropic endeavors that he orchestrates through his church. “He’s a rare and special man, I can’t wait to work hand in hand with him as his wife.”

Dr. Jones, former pastor of Fourth Baptist Church in Richmond, has led the Village of Faith since 2005, which he founded with his ex-wife Tanya Jones. The couple divorced about six years ago.

The church has about 900 members on its rolls and operates in two locations, one in Sandston in Henrico County and the other in Midlothian in Chesterfield County.

Dr. Jones holds and undergraduate degree from the University of Colorado, a master’s in divinity from Virginia Union University and earned his doctoral degree from McCormick Theological Seminary.

Ms. Cober, who grew up in Virginia Beach, is a graduate of Virginia Commonwealth University. She has spent the last 13 years with Atlantic Records promoting some of the top artists in the country, including Bruno Mars, Trey Songz and Wiz Khalifa and Cardi B.