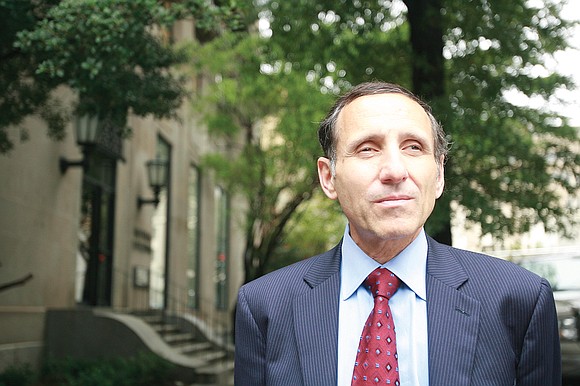 A year after 85 percent of voters backed his proposal to require the mayor to come up with a fully funded plan without raising taxes or to say why he could not, Mr. Goldman is now focusing on the prospect of giving city residents a say in whether replacing a new Richmond Coliseum is more important than replacing aging school buildings.

Thomas F. “Tom” Farrell II, the top executive at Dominion Energy, has been pushing a massive proposal to pay for a new Coliseum. Details of the plan are still under negotiation with Mayor Levar M. Stoney and his staff and have not gone before City Council.

However, under a broad outline of the plan that has been released to the public, Mr. Farrell and his allies would not put up any money. Instead, they want to attract private interests to create $1.4 billion in new development on public land near City Hall, including a luxury hotel, 2,800 apartments, offices and retail space. Under the plan, they would use 100 percent of the new taxes generated by the developments to repay the $220 million cost of replacing the nearly 50-year-old Coliseum with a modern 17,500-seat arena.

To Mr. Goldman, devoting 100 percent of the new taxes to build a Coliseum would be an excessive contribution from taxpayers from what is known as a Tax Increment Financing District, or TIF.

In Mr. Goldman’s view, approval of the Coliseum plan would set back any prospect of upgrading the bulk of city schools and ensure that the city’s mostly poor and African-American students would continue to attend decaying school buildings.

“In other cities, TIF districts provide just a share of the new taxes,” with the rest going to other needs, Mr. Goldman told supporters last Saturday at a meeting where he presented the first draft of a referendum he hopes eventually could go to voters.

His proposal would change the City Charter to require that at least 49 percent of new taxes from a TIF District be devoted to school construction projects.

“This is not about opposing the Coliseum plan,” he said, but about fairness in the way city tax dollars get used, particularly with projections indicating that the city would need to spend between $500 million and $800 million to modernize its buildings.

Mayor Stoney already has rejected that kind of spending. So far, he has pushed through an increase in the sales tax on meals to cover the cost of building three new schools by 2020 and has pooh-poohed the idea of spending any more in the next five years. He has said that any additional spending could undermine his efforts to gain a triple A bond rating for the city.

Mr. Goldman plans to decide by next weekend whether to try to get this latest initiative on the ballot.