Richmond voters are likely to have a say on whether they want to make building new schools more of a priority than spending millions of dollars to replace the Richmond Coliseum in Downtown.

Paul Goldman, leader of the Put Schools First campaign, reported Tuesday that 15,057 signatures have been collected from registered voters to put an initiative on the Nov. 5 ballot for Richmond voters to decide the issue. That’s far more than the 10,341 signatures officials said were needed. 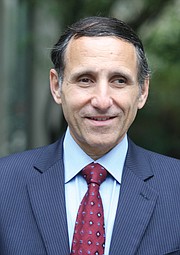 While the signatures, turned in before Wednesday’s 5 p.m. deadline, still need to be checked, Mr. Goldman is confident the campaign has collected enough signatures to secure a Richmond Circuit Court order to put the measure on the ballot.

“Thanks to community support, the voters of this city are going to be able to tell their elected leaders whether modernizing our decrepit, obsolete school facilities is far more important to them than putting public funds into a new arena,” Mr. Goldman said.

He is responsible for getting two other initiatives on the ballot in the past, both of which were approved overwhelmingly by voters and became law, including the popular election of Richmond’s mayor.

While details of the plan still have not been presented by the mayor to City Council, it calls for private construction of nearly 3,000 new apartments, two new hotels and several dozen restaurants, retail outlets and entertainment sites, with the tax revenue generated by those developments earmarked to pay off the money borrowed for a new arena.

Payment of that debt, which could run more than $600 million, also would require

using growth in real estate tax revenue from 70 other blocks of Downtown, according to information Mayor Stoney has released.

Mr. Goldman, who sees the potential shift of money to the Coliseum and away from an effort to replace the city’s crumbling schools, is seeking to block the financial underpinnings of the Coliseum plan.

The referendum to go before city voters would change the City Charter to require the city to use 51 percent of any tax dollars raised through a Coliseum-style venture to modernize schools, rather than using 100 percent tax dollars to build and repay the debt for construction of a new arena.

The referendum proposes the change for any venture to be developed using a vehicle called Tax Increment Financing, where the growth in tax revenue of all kinds is to be used as a revenue stream to pay off debt, a supposed key element of the Coliseum-replacement proposal.

Should the referendum pass, it would go to the General Assembly in the 2020 session for final approval.

Mr. Goldman also included in the referendum a proposal to handcuff City Council when it comes to increasing the city’s sales tax on restaurant meals and prepared food — the meals tax — beyond the current 7.5 percent. The language would bar the council from raising the meals tax for five years and thereafter require the council to submit any proposed increase to the voters before it could become effective.