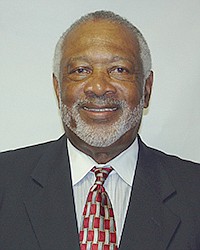 After a lengthy snooze, the Virginia Union University golf team has emerged from hibernation.

The Panthers displayed considerable talent and depth April 18 and 19 in winning its first CIAA golf championship since 1971. That was four years before Tiger Woods was born and at a time when African-Americans were barred from playing on many private courses.

“This was a very special season,” said VUU Coach E. Lee Coble. “Forty-eight years is a long time between championships. I promise it won’t be another 48 years.”

In runaway fashion, “Coble’s Clubbers” captured the eight-school event at The Club at Viniterra in New Kent County with a 607 score. That was 15 strokes better than runner-up Livingstone College of North Carolina.

The Panthers posted an overall average score of 75.8 for the two rounds on Viniterra’s Par 72 layout. Meints was the team medalist with a six-over 150 for 36 holes.

Meints, a senior from Texas, and Barkley, a freshman from Johannesburg, South Africa, made the All-CIAA Tournament team and were also selected co-Rookies of the Year.

Meints and Barkley were joined on the All-Conference team by Day and Willis.

Prior to winning the overall CIAA Tournament hosted by VUU, the Panthers had won three CIAA events — the Mid-Major, CIAA South and CIAA North.

And they’re not through. Next up is the NCAA Division II Regional May 8 through 11 in Greensburg, Pa. The NCAA Division II Championships will be May 20 through 24 at The Resort at Glade Springs in Daniels, W.Va. No historically black college or university has ever made a serious run at the crown in the event going back to 1963.

Coach Coble, a native of Mebane, N.C., came to VUU four years ago after serving as the first African-American president of the Virginia State Golf Association. The coach will need to hit the recruiting trail. Meints, Day and Escalante are all seniors.

While historically black colleges and universities have never made their mark in NCAA golf, there was one player of color who left an indelible impression.

In 1996, Stanford University’s 20-year-old Tiger Woods was the NCAA Division I medalist at The Honors Course in Ooltewah, Tenn., shooting a three-under par 285 for four rounds.

Tiger joined the PGA circuit the next year and claimed the Masters Tournament in April 1997 by a record margin of 12 strokes.