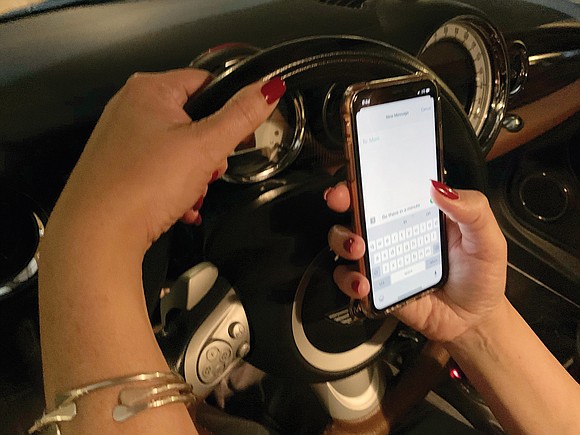 Just holding a cell phone in your hand while driving could soon cost you $125 in the city of Richmond.

City Council voted 9-0 Monday night to authorize police of- ficers to pull over drivers and give them a citation for talking, texting or having a cell phone in their hand while the vehicle is in motion

The goal of the ordinance, which was proposed by Mayor Levar M. Stoney and will go into effect in six months, is to cut down on accidents and injuries caused by distracted driving.

The mayor’s office and Police Chief Will Smith said the city would run a publicity campaign during the 180-day grace period to warn drivers about the new law, effective June 2020.

Richmond is the third locality in Virginia after Hampton and Spotsylvania County to pass a local safety ordinance on cell phone use while driving. In Richmond, a ticket would not be reported as a traffic offense to the Virginia Department of Motor Vehicles because there is no state law making it illegal to drive while holding a cell phone.

However, those who are ticketed in Richmond after the grace period could face a $125 fine for a first offense and $250 for each subsequent offense, according to the ordinance.

City Council approved the measure after hearing from a mother whose daughter was killed by a distracted driver and from a conservator of the peace who lost his legs after being hit by a driver on a cell phone.

Chief Smith, who supported the new law, reported that 218 people have been killed or injured this year in Richmond by drivers using cell phones.

“It’s just not acceptable to use a cell phone while driving when we know the dire consequences,” Mayor Stoney stated in a news release issued after the vote.

“This ban sends a clear message: Put down the phone,” he stated. “I hope the General Assembly will send the same message next year” with passage of legislation that would make holding a cell phone while driving a reportable traffic offense.

Also praising the measure was Louise Lockett Gordon, director of Bike Walk RVA. “We’re excited to see the city pass a common sense policy to help save the lives of people using our streets. Keeping drivers’hands on the wheel and not handling phones means their attention is where it should be — on driving safety.”