EVMS dean, who shut down yearbook in 2013, launches investigation into racist photos 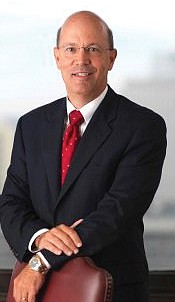 As Gov. Ralph S. Northam weighed his political future after a racist photo on his 1984 medical school yearbook page surfaced last week, Eastern Virginia Medical School officials held a press conference Tuesday in Norfolk to address the school’s investigation surrounding that photo and others that have since been brought to light.

CNN and other news outlets have reported that yearbook and others at EVMS also contained other racist or otherwise offensive photos.

Calls for Gov. Northam to resign have intensified. But questions have also arisen about how the photos came to be published in the first place.

Dr. Richard Homan, president and provost of EVMS, told reporters at Tuesday’s news conference that he had not had any conversations with the governor about the photos and did not know who was pictured in the photo on Gov. Northam’s page. He said the medical school takes full responsibility for the publication of the yearbooks.

He apologized on behalf of the medical school for past yearbooks that have contained “shockingly abhorrent pictures that are antithetical to the values and principles of our professions.

“Some are shockingly racist, some are repugnant and others are unprofessional and inappropriate,” Dr. Homan said.

But he said the buck stops with medical school leaders.

(Dr. Homan stopped the yearbook’s publication when he arrived in 2013 and was shown photos in the most recent book of three men dressed in Confederate uniforms and standing in front of the Confederate battle flag.)

“This was the ultimate responsibility of our institution — EVMS — and not of the students,” he said. Oversight, he said he has been told, was a blended mix of student and faculty and differed each year of the yearbook.

“It was bootstrapped from limited resources with faculty and students that were very closely knit,” Dr. Homan said.

Dr. Homan said EVMS has established a community advisory board to perform an independent assessment of the culture and operations of EVMS.

Gilbert Bland, the immediate past chair of the State Council of Higher Education for Virginia and president and chief executive officer of Urban League of Hampton Roads, will chair the board.

Among other board members is Dr. L.D. Britt, chair of surgery at EVMS and former past president of the American College of Surgeons.

Richard Cullen, a former Virginia attorney general and U.S. attorney in Virginia, from the law firm of McGuireWoods, also has been hired to conduct a detailed, third-party investigation.

The law firm and the advisory board will work together and a single report will be issued to the board and made available to the public, Dr. Homan said.

He added that there will be no more yearbooks since the last one published in 2013.