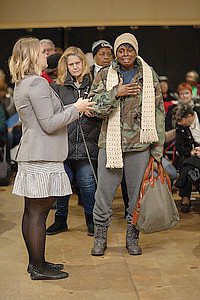 Donna Royster nearly wept at the postal town hall last Saturday when she described the pain of not receiving letters and photos from her grandchildren. L.L. Christian/f7photoz

Jean Morris is tired of having the Forest Hill Post Office refusing to deliver packages to her South Side residence.

Donna Royster is fed up with not receiving any of the letters her grandchildren keep sending her from Hawaii at her East End apartment.

And Christina McGuire is annoyed that she keeps getting letters intended for someone else at her home on East Grace Street, including at least two that were supposed to be delivered to an address in Sandston in eastern Henrico County.

They were among at least 18 people who spelled out problems they are having with mail delivery at a town hall meeting 4th District Congressman A. Donald McEachin hosted Saturday at the Robinson Theater Community Arts Center in Church Hill with representatives of the U.S. Postal Service.

After the 90-minute session, Rep. McEachin told reporters that he wants to see improvement and will be having his staff follow up with the Postal Service and constituents to see if the issues have been resolved.

With tens of thousands of addresses, he knows there can be mistakes, “but not at this level or this voluminous.”

Ms. Royster was almost in tears as she told the USPS representatives, “My grandchildren live in Hawaii — they’ve been there six months now — I haven’t gotten one piece of mail from my grandchildren; not one.

“No cards, no birthday cake, no nothing,” she said. “I live by myself and it’s sad.”

Concerns also included monthlong delays in the delivery of summonses for jury duty, missing checks and prescription medicines and cutoffs of health coverage due to the failure to receive earlier notices.

One person complained that a letter from the Internal Revenue Service was found lying in the street, while others talked about finding bank statements and other important mail in street trash bins or discarded on lawns or in nearby alleys.

Since taking office more than a year ago, Rep. McEachin said his office has received more than 100 complaints about missing mail and poor service in Richmond.

Despite passing the complaints to USPS, the congressman said Richmond Postmaster Joseph Thekkekara insisted he was completely unaware of the problems when they met last month, even though many complaints had been posted for the public on the Church Hill People’s News blog on Facebook.

Several people, including Ms. McGuire, said they have hit a wall in Richmond in trying to file complaints. She said she gave up after spending four hours waiting at the Main Post Office at Brook Road, only to have the office shut down for the day.

“This is not how we want to do business,” Ms. Atherly said after the meeting in expressing disappointment and promising change.