• Records through games of Jan. 14 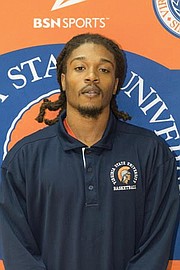 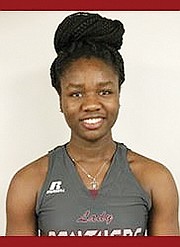 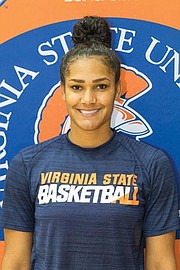 Virginia Union University’s basketball season has been given a jumpstart.

When the Panthers trek to Ettrick on Saturday to play Virginia State University in the Freedom Classic, VUU will have new vroom under the hood.

Terrell Leach, who didn’t figure into the preseason analysis, figures to have much to say about how the campaign will finish.

Leach is a 24-year-old native of High Point, N.C., who most recently played the 2015-16 season at Winston-Salem State University. The 6-foot shooting guard is a jaw-dropping talent with a glossy résumé — albeit one with a layer of dust.

In his first three games since becoming eligible, Leach, wearing the No. 0 jersey, has averaged 19.3 points in about 31 minutes per game, with a high of 31 points in VUU’s game on the road against Shaw University in North Carolina. A threat from distance, Leach has hit 10 of 22 3-pointers and 14 of 19 free throws, with three steals and three assists.

Leach is far from just a shooter. He’s also a phenomenal leaper, capable of a full menu of theatrical dunks.

In 28 games as a freshman and sophomore at Winston-Salem State, Leach averaged 13.5 points.

He was suspended from the university and took a job assembling bus seats at a factory in Thomasville, N.C.

VUU Coach Jay Butler contacted Leach via Facebook prior to last semester and convinced him to enroll at the Richmond institution on Lombardy Street. He will have one more season of eligibility following this campaign.

Demarius Pitts, a pacesetter for CIAA Rookie of the Year, averages 16 points while 6-foot-7 junior Will Jenkins averages 15 points and nine rebounds.

VUU is hopeful of peaking again at the CIAA Tournament in Charlotte, N.C., which starts Feb. 25. Last year, Coach Butler guided the Panthers to their first CIAA title since 2006.

VSU Coach Lonnie Blow’s surging Trojans are 13-3, but only four points from being 15-0. The losses, all in November, were by 59-58 to the University of Pittsburgh at Johnstown; 69-67 to Indiana University of Pennsylvania; and 87-86 to King University in Tennessee.

The balanced Trojans are led by Jahmere Howze with 13.5 points and 6.5 rebounds. Cyonte Melvin collects 12 points and four rebounds per game and is a stellar defensive player on the perimeter.

Both Howze and Melvin would be candidates for CIAA Player of the Year if VSU repeats as CIAA Northern Division champion.

Brandon Holley, a VSU senior out of Richmond’s George Wythe High School, averages 9.4 points and ranks with the CIAA’s most dangerous 3-point shooters at 42 percent.

Senior Walter Williams from Henrico High School will sit out the remainder of this season as a medical redshirt. He suffered a foot injury in November and is expected to be granted another full season of eligibility.

Defensive-minded Coach Blow continues to shine on the Trojans’ sidelines. The Tidewater native is 116-41 in his sixth season, including 38-8 the past two years.

For first time, the Freedom Classic will include the women’s teams as part of a doubleheader format. It was an all-men’s event during the tournament’s previous 23 years at the Richmond Coliseum.

Ifunanya Okoye is VUU’s “local girl from far away.” The 5-foot-10 freshman is a native of Lagos, Nigeria, but went to high school at Banner Christian School in Chesterfield County.

Rejoice Spivey has become VUU’s all-time assists leader. The senior from Alexandria had 10 assists in a Jan. 10 victory at Shaw to raise her career total to 438.

VSU boasts one of the CIAA’s top low-post operators in 5-foot-11 Chrissana Green from Jamestown, N.Y. Green averages 17 points and 12 rebounds with 13 blocked shots. Frequently fouled on the inside, she is 63 for 108 at the line for 58 percent.

Another inside force is 6-foot Shalyn Washington, averaging seven points and five rebounds. Washington starred at Highland Springs High School and transferred to VSU from Frederick Community College in Maryland.