Parney puts the ‘pro’ in promoter for EL All-Star Game 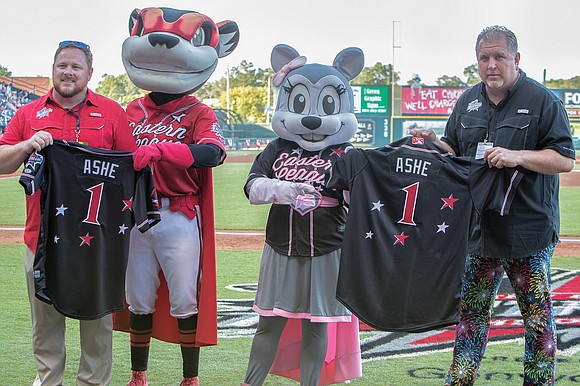 The late Richmond native and tennis great Arthur Ashe Jr. is remembered and honored with jerseys bearing his name during the All-Star Game at the baseball stadium located on Richmond’s Arthur Ashe Boulevard. Showing the jerseys to the crowd are, from left, Ben Rothrock, the Squirrels’ general manager; team mascots Nutzy and Nutasha; and Todd “Parney” Parnell, the Squirrels’ vice president and chief operating officer. Photo by James Haskins

With the theme “The Next Big Thing,” the Eastern League All-Star Game lived up to the hype — and then some. Everything seemed big, bigger, biggest. Even the event’s star promoter, Todd “Parney” Parnell, “grew” for the special occasion.

Top players from affiliates of Major League Baseball teams around the country pause for the Pledge of Allegiance at The Diamond before last week’s All-Star Game.

Officially, Parnell is vice president and chief operating officer of the Richmond Flying Squirrels, the official host team for the four days of All-Star events.

On July 9, Parney transformed into the “world’s tallest centerfielder” during the event’s Celebrity Home Run Derby at The Diamond. Wearing an oversized fielder’s glove, Parney towered above the crowd in a 25-foot scissors lift in short centerfield. From his eye in the sky, he exchanged friendly barbs with hitters, waving his glove, daring them to hit his way and “buzz the tower.”

The crowd ate it up.

“We wanted to do something crazy out there,” Parney said, deflecting credit to his diligent staff. “We had a bunch of ideas and that’s where we landed.”

a sky diver parachutes onto the field at The Diamond before the game on July 10.

Fans couldn’t help but smile at the tower and the many other attractions during four full days brimming with family fun. Call it “Parney’s Party.” There were events all around the city — from music and games on Brown’s Island, to country music at Richmond Raceway, to celebrations at the James Center in Downtown and all up and down Arthur Ashe Boulevard where The Diamond left the welcome lights on for fans who came from many states. There was even a gala pep rally normally seen at a college football game.

The schedule was big on entertainment. For visitors who came from far away as Maine and New Hampshire, planned events included raft rides on the James River, trips to Kings Dominion and to watch Virginia Commonwealth University basketball practices and a tribute to late Richmond native, tennis star and humanitarian Arthur Ashe Jr.

“We put our heart and soul into it. I am exhausted,” Parney said afterward.

In the past, the EL All-Star Game has been a two-day affair with a home run contest followed by the game. Thinking big, as always, Parney doubled it to four days. This wasn’t just a baseball event; it was more of a Richmond showcase.

“If you only go to The Diamond, you’ll be missing 95 percent of Richmond,” Parney explained. “We wanted to show off the entire city.”

The game, featuring pre-game sky divers, wasn’t forgotten either. The game on July 10 drew a sellout crowd of 9,560, the biggest ever for the event. This was to be expected. Since coming to Richmond 10 years ago, the Flying Squirrels have been at or near the top of AA minor league attendance. The Flying Squirrels have averaged more than 6,000 fans per game since the team’s inception.

It has been said, only partly in jest, that Parney could sell 6,000 tickets to watch The Diamond’s infield grass grow. He’d mix in some great music, games and lots of good food and drinks and fans would leave with smiles on their faces, looking forward to a return.

Parney puts the “pro” in promoter. Richmonders have known all about that for a decade. Now the entire Eastern League has gotten the message. “The Next Big Thing” will be a hard act to follow.

Flying Squirrels No. 1 in fan attendance

Despite a disappointing record on the field, the Richmond Flying Squirrels are in first place in the Eastern League for attendance at the games.

The Flying Squirrels, a Class AA affiliate of the San Francisco Giants, is averaging 5,984 fans per game through 43 home dates at The Diamond. Second in EL attendance is the Hartford Yard Goats of Connecticut, with an average crowd of 5,905.

The Squirrels return home Thursday, July 18, to begin a seven game home stand against the Erie SeaWolves of Pennsylvania and the Bowie Baysox of Maryland. The Flying Squirrels were 23-44 for the season’s first half standings and started this week 10-13 for the second half.