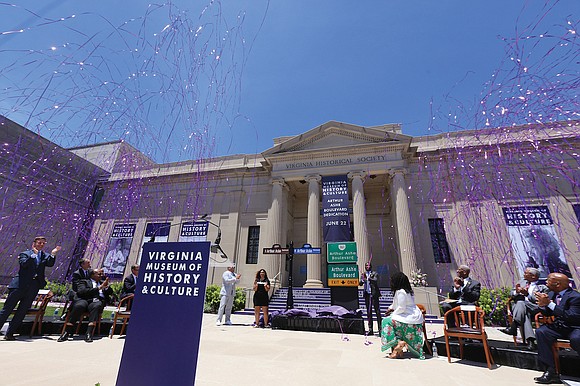 Local, state and national figures joined a crowd of thousands Saturday at the Virginia Museum of History & Culture to celebrate the official renaming of Arthur Ashe Boulevard.

“Today we celebrate a true champion in Richmond, not just a champion on the tennis court, but on the world stage for civil rights and for racial equality,” Richmond Mayor Levar M. Stoney said.

The dedication, which saw the unveiling of new street signs for Arthur Ashe Boulevard, was the culmination of efforts over two decades to honor the tennis trailblazer and international human rights activist, with City Councilwoman Kim B. Gray, 2nd District, proving to be instrumental in the success of the latest effort when City Council approved the renaming in February. Similar efforts failed in 1993 and 2003.

Ms. Gray joined Mayor Stoney and Mr. Ashe’s newphew, David O. Harris Jr. of Henrico County, in unveiling the new signs. The tarps were pulled off to loud booms of two cannons that fired purple streamers into the air. The crowd, on its feet with cellphones and other cameras, cheered and photographed the historic moment.

“One should never forget — our efforts together are epic,” Mr. Harris said in his remarks to the huge crowd that stretched from the museum’s lawn to the boulevard itself.

Mr. Harris was a leading figure behind the renaming effort, his words Saturday guided by his uncle’s example in advocating for inclusivity and denouncing bigotry.

“If you find yourself a gatekeeper to discrimination and exclusionary tactics, give up your keys today,” Mr. Harris told the applauding crowd.

Dozens of Mr. Ashe’s relatives joined in Saturday’s celebration, seated in a central section of the audience, with many wearing a yellow flower pinned to their lapels.

The mention of Mr. Ashe’s ideals was a frequent feature of the day’s speakers, including U.S. Sen. Tim Kaine, 4th District Congressman A. Donald McEachin, Gov. Ralph S. Northam and keynote speaker and civil rights icon, U.S. Rep. John R. Lewis of Georgia, and among many people in the crowd. Among the notables introduced at the program were Congressional Reps. Robert C. “Bobby” Scott of Newport News, Karen R. Bass of California, Ayanna Pressley of Massachusetts and Lt. Gov. Justin E. Fairfax.

Sen. Kaine talked about the protests and controversy that erupted in 1996 — when he was serving on City Council — surrounding the council’s decision to place a statue of Mr. Ashe on Monument Avenue, a thoroughfare filled with statues to Confederates.

He applauded the current City Council and Ms. Gray for “this act of healing — the naming of the boulevard, a principle gateway into our city, to honor the great Arthur Ashe.”

He called it an act of healing in a state and country “that still needs healing to this day.”

The choice of the Boulevard to rename in Mr. Ashe’s honor was an apt one. Mr. Ashe was barred in his youth from playing on the Byrd Park tennis courts that sit at the street’s south end.

The courts wouldn’t stay closed to him, however. Mr. Ashe would claim victory in the Davis Cup semifinals in Byrd Park in 1968. In 1963, he became the first black member of the U.S. team.