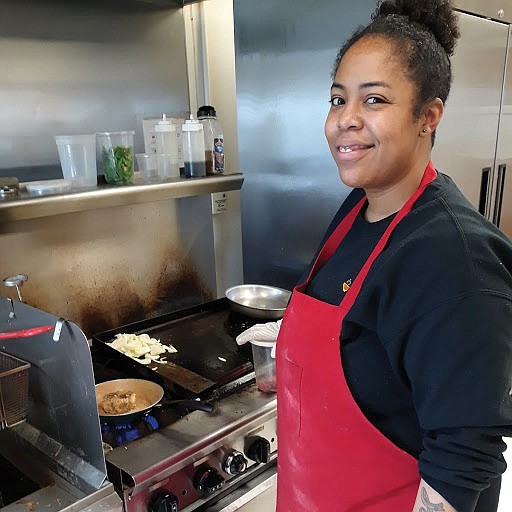 Tiara S. Smith prepares a chicken dish in the kitchen of Faith Community Baptist Church in the East End where she has run her lunch business and catering company, Drop Off Chef, since 2017. Jeremy M. Lazarus/Richmond Free Press

On weekdays, the kitchen at Faith Community Baptist Church in Richmond’s East End is a beehive of activity six hours a day.

Tiara S. Smith has turned the once-empty kitchen into the cooking headquarters for her growing lunch delivery and catering company, Drop Off Chef.

Amid controlled chaos, she cooks meals and orchestrates deliveries to a growing list of customers who call for her chicken and fish creations five days a week.

She said the church’s willingness to rent the space for $300 a month has been a godsend for her and the 11 part-time people she pays to help prepare and deliver the meals.

“Commercial kitchens are expensive. Finding a fully equipped space that doesn’t cost an arm and a leg means I can concentrate on building the business,” said Ms. Smith, a former bartender who is passionate about the food she prepares and the encouraging messages she sends out to her customers.

And that’s the kind of activity that the church’s founding pastor, Dr. Patricia A. Gould-Champ, hoped for when she offered to rent the kitchen to Ms. Smith two years ago and turn what had been mostly unused space into a place that generates jobs and new opportunity in a struggling area of the city.

For years, Dr. Gould-Champ, who also is an associate professor of practical theology at Virginia Union University’s seminary, has beaten the drum for churches to get more involved in using their space to support community business growth.

“We all have parking lots and kitchens and other spaces that we use on Sundays, but are left empty the rest of the week,” Dr. Gould-Champ said.

In her view, churches should be looking for ways to make their empty space more productive in ways that benefit the community. And that means doing more than giving away food and clothing to the needy, she said.

“We need to go beyond preaching to helping to create prosperity,” she said. That includes turning portions of church land into small farms to generate fresh food, as her church also is doing.

Along with renting to Drop Off Chef, Dr. Gould-Champ said that she invites other chefs and fledgling food entrepreneurs to come in on two Sundays a month to prepare and sell lunches to congregants and others.

Across the city, churches use part of their property to operate day care centers, schools and similar operations that create jobs and also provide another stream of revenue to support operations.

And there are other examples, such as First Baptist Church of South Richmond, which has developed apartments and office space on its property, built homes in nearby neighborhoods and also provided rental space for community and private events in its Imani Center on its South Richmond campus.

That’s also the case with United Nations Church International, which continues to rent part of its South Side property to small businesses whose offerings attract people who belong to the church while also generating employment opportunities.

When she looks out at her church parking lot, she sees an opportunity for a food court. She sought to jump-start that idea by purchasing a food cart, but she could only operate it one day a week.

She said other churches in the East End turned her down when she urged them to buy their own carts that could be set up at her church or another mutually agreed upon site.

However, that could change this year. Ms. Smith has taken over operation of the food cart and believes she can persuade other vendors to set up on the lawn in front of the church later in the spring.

Meanwhile, Ms. Smith is staying focused on Drop Off Chef.

Ms. Smith, who trained to be a chef at Johnson & Wales University, noticed that few places offered lunch delivery and believed she could fill that niche. In 2015, she started using her home kitchen to make lunches and deliver them to friends. But she soon saw she needed better and larger space after people started spreading the word about her food to their friends and on social media.

She said her business has quadrupled since moving to the church in 2017, and is making a profit as her lunch orders increase and more people hire her for catering jobs.

“This has been an amazing journey,” she said. “I am so grateful that Faith Community Baptist was there to help me achieve my dreams.”