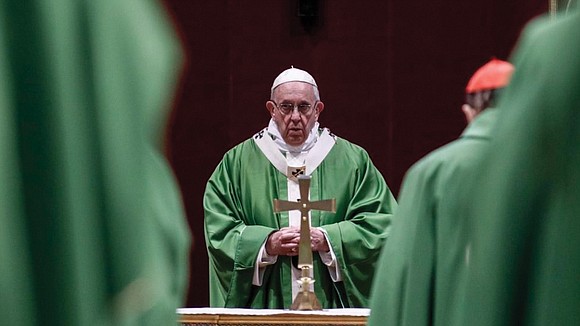 In his final address to nearly 190 bishops attending last week’s Vatican summit on sex abuse, Pope Francis called for the eradication of abuse both inside and outside the Roman Catholic Church.

“I make a heartfelt appeal for an all-out battle against the abuse of minors both sexually and in other areas, on the part of all authorities and individuals, for we are dealing with abominable crimes that must be erased from the face of the earth. This is demanded by all the many victims hidden in families and in the various settings of our societies,” Pope Francis said.

The pontiff’s address, which referred to clerics who abuse children as “tools of Satan,” began with a litany of statistics regarding multiple kinds of sex abuse and its effects in various parts of the world.

He then outlined eight principles for the church: Protecting children; maintaining “seriousness” and rejecting cover-ups; “purification” within the church; better screening for candidates for the priesthood to avoid potential abusers; taking a united approach to the issue across bishops conferences; accompanying those who have been abused; confronting child pornography and online abuse; and combating “sexual tourism.”

“If in the church there should emerge even a single case of abuse — which already in itself represents an atrocity — that case will be faced with the utmost seriousness,” he said. “Indeed, in people’s justified anger, the church sees the reflection of the wrath of God, betrayed and insulted by these deceitful consecrated persons.”

As the pontiff concluded the conference, which focused on “the Protection of Minors in the Church,” clerics in the room burst into applause.

The pope’s remarks capped off an intense four days of discussion and debate at the Vatican summit on the topic of sex abuse. Speakers at the conference, who included bishops, nuns and journalists who have covered the abuse crisis, put forward several recommendations on how to tackle abuse.

Advocates for abuse survivors were quick to express frustration with the pope’s speech. Standing in front of St. Peter’s Basilica, Peter Saunders, a sex abuse survivor visiting Rome with the group Ending Clergy Abuse, said he was “very disappointed” with both the pontiff’s address and the summit in general.

“The fact that it lacked passion or commitment is one thing, but it contained nothing concrete. They’ve had four days to decide on the things they could do that could make a difference, and they have avoided that,” Mr. Saunders told Religion News Service. “They’ve heard some impassioned speeches. They’ve had cardinals admitting burning files. We’ve had nuns saying it’s terrible … but they haven’t said, ‘Right, this is what we do next.’ ”

Virginia’s two Roman Catholic dioceses published on Feb. 13 lists of 58 priests credibly accused of sexually abusing minors. Forty-two of those priests were connected in some way with the Diocese of Richmond, while the names of 16 priests were on the list released by the Diocese of Arlington.

The bishops of both dioceses apologized to victims in letters that accompanied the lists, and said none of the clergy who names were on the lists are currently in active ministry.