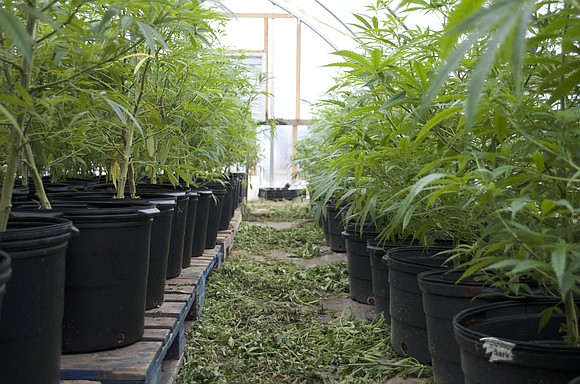 At first glance, it looks like a stoner’s paradise: Acres of plants that resemble marijuana. But this crop is hemp, a relative of cannabis that has commercial uses ranging from textiles and animal feed to health products.

Officials at the Southern Virginia Hemp Co., as well as other farmers and processors of the plant, say hemp could be a big boost to the state’s agricultural sector as demand for tobacco wanes. And it just got much easier to grow hemp in the commonwealth.

Lawmakers have amended the state’s hemp laws to match the rules in the 2018 federal farm bill passed by Congress. Virginia farmers now can grow hemp for producing cannabidiol, or CBD, a naturally occurring chemical that some say has mental and physical health benefits.

CBD products have become popular during the past few years, with some industry analysts predicting the CBD industry will be worth $22 billion by 2022. Until now, only researchers at Virginia universities could grow hemp for making CBD.

The Virginia Department of Agriculture and Consumer Services has seen a surge in grower and processor applications since Congress passed the farm bill in December. The agency expects the number of applicants to increase even more now that Virginia has amended its hemp laws to match the federal laws.

“VDACS was not issuing registrations to processor applicants who indicated that their sole goal was to sell a hemp-derived CBD to the public,” said Erin Williams, a spokesperson for the agency. “With the 2019 amendment, I think it will clear up the gray area.”

As of Tuesday, the department had issued 629 grower registrations and 92 processor registrations. So far, Virginia hemp growers are planning to cultivate more than 2,000 acres of hemp this year.

In Southside Virginia, where tobacco growers have been hit hard by declining sales and tariffs on their products, farmers increasingly are turning to hemp as a potential cash crop that can be grown in addition to tobacco. Southside Virginia has more registered hemp growers than any other region in the state.

“There’s significant interest in Southside Virginia, particularly among tobacco growers who are looking to add a crop to what they’re doing,” Ms. Williams said.

For years, several other states have allowed farmers to grow hemp for the manufacture of CBD products. But Virginia farmers were barred from doing so until lawmakers approved House Bill 1839 in February.

Gov. Ralph S. Northam signed the bill into law on March 21. Thanks to an emergency clause, it took effect immediately.

The legislation comes on the heels of the 2018 federal farm bill, which established a regulatory framework for the commercial production of hemp. HB 1839 conforms Virginia’s hemp laws to match the provisions of the federal bill.

The Southern Virginia Hemp Co., a farm in the town of Jarratt straddling Greensville and Sussex counties, is expanding its operations to meet the demand for CBD products. The company plans to grow between 75 and 150 acres of hemp this year and aims to hire 40 additional employees to work on the farm this summer.