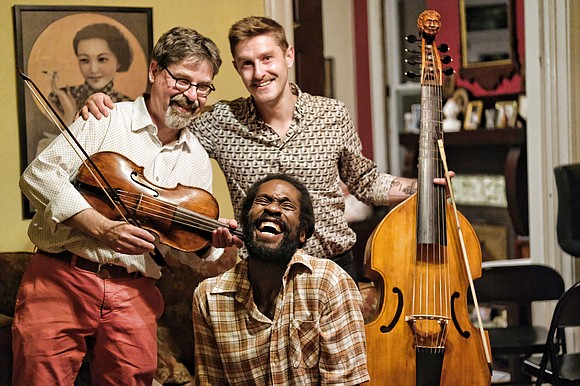 Next week, Mr. Dunn, 38, will join a diverse and talented Richmond cast of 20 — including dancers from the Latin Ballet — to present the world premiere of “Minerva Times Change” a three-act, music-filled creation that focuses on changing relationships between people and ancient gods and moves from ancient Italy to 18th century London and finally stops at a coffee shop in Richmond.

Mr. Dunn, a North Carolina transplant who works in the health care industry, feels blessed to be part of it. How fitting since Minerva is the name of the Roman goddess of wisdom, strategy, war and business. And how fitting that her name ends in RVA, the city’s brand.

As it turns out, Mr. Dunn will play multiple roles in the show that features lots of singing and combines classical melodies from an obscure Handel opera called “Imeneo” with the modern sounds of musician and composer Niccolo Seligmann, a Richmond native now living in Baltimore.

Mr. Dunn said he didn’t have much connection to opera as the son of a tobacco farmer growing up on a farm, but he said he developed a taste for it listening to public radio broadcasts.

Gabrielle Maes, who will play Minerva in the opera, shows off her costume.

When he mentioned to a friend that he would love to sing opera, he found himself caught up in a whirlwind of activity. As it happened, the friend’s mother, Gabrielle Maes, 58, a Canadian transplant who has earned a reputation for bringing creative people together in Richmond, was working on creating an opera with Raphael Seligmann, a full-time banker who plays the violin and viola.

Both Mr. Seligmann and Ms. Maes had been involved in a Richmond-based presentation of the opera “Dido and Aeneas” last year and wanted to try another opera with a new company they are calling “Into the Woods” to again tap into the large pool of often overlooked talent in Richmond.

A founder of Jefferson Baroque, a musical group that performs with original and replicas of 16th-, 17th- and 18th-century instruments, Mr. Seligmann was in the process of tearing apart “Imeneo” and writing the words for a completely new opera, while involving his son in helping to create the musical score.

Meanwhile he and Ms. Maes, who will play Minerva as she transforms from a powerful goddess who can change outcomes to a coffee shop owner who can only listen and let people deal with their own problems, were looking for people who could sing and act.

Mr. Dunn was among those who seemed ideal, given his broad experience in musical theater and other stage programs.

In one part of the show, Mr. Dunn will play a musically talented servant of Handel, a tip of Mr. Seligmann’s cap to a real person who worked for Handel and composed scores.

In the final act, Mr. Dunn will play Little Walt, a rapper, when the show shifts to the coffee shop in Richmond.

Mr. Dunn views the opera as helping people understand that they have replaced old gods with the new god of technology that dominates their lives in the form of cellphones and computers.

Mr. Seligmann hopes the opera also can be a breakthrough in attracting people who think opera is too highbrow.

“This has something for everyone,” he said. “There is no etiquette to follow. We don’t care whether people clap in the wrong places. We just want everyone who comes to enjoy themselves.”

In all, Into the Woods will present six more shows after opening night, including at 8 p.m. Friday, June 7, and Saturday, June 8, and then three more performances at 8 p.m. Thursday through Saturday, June 13 to 15, and at 4 p.m. Sunday, June 16, all at the church.