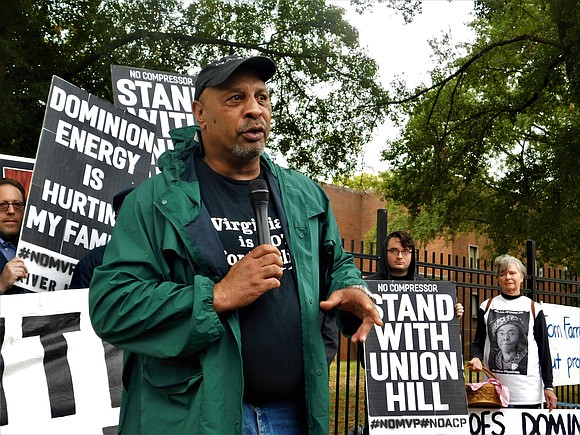 “NAACP, we find ourselves in a mess right now.”

Those words, delivered last Saturday by the Rev. Nelson B. Rivers III, vice president of religious affairs and external relations with the National Action Network, were referring to the climate of bigotry, hate and fear in the world at large. But they easily could have applied to the internal and external troubles the civil rights organization has faced during the past year.

Addressing a luncheon audience of about 200 people at the Virginia State Conference NAACP’s 84th State Convention, Rev. Rivers was adamant that the NAACP would stand strong in the face of threats from “fake racists with orange hair,” saying that the challenges ahead “ain’t nothing new” for the storied organization.

But while hateful politicians may be old hat for the NAACP, the turmoil that’s recently surrounded the Virginia NAACP is a new phenomenon.

On the eve of the state convention, protesters called out the organization for bringing on Dominion Energy as an event sponsor and co-host of a reception and panel discussion on 400 years of African-American history.

Standing between the gates of Virginia Union University and the state NAACP headquarters on West Graham Road in North Side, 18 protesters demanded the organization either cancel the history program or remove Dominion Energy as co-sponsor.

Their protest was timed as members of the state NAACP Executive Committee arrived Oct. 31 in Richmond for a pre-conference meeting.

The source of their anger: Dominion Energy is continuing its plans for a natural gas compressor that could potentially pollute the historic black community of Union Hill in Buckingham County. The community was founded after the end of the Civil War by emancipated African-Americans.

The compressor is a key part of the construction of the Atlantic Coast Pipeline that will run through Virginia, North Carolina and West Virginia.

The state NAACP’s relationship with Dominion Energy has dogged the state organization recently, with members critical of the actions of high-ranking officers, including former state president, the Rev. Kevin Chandler, seemingly backing the energy giant in the face of the federal lawsuit.

Members noted their concerns in a letter to the national NAACP in February, petitioning them to intervene.

In April, Gloria Sweet-Love of Tennessee was appointed as administrator for the Virginia NAACP by national officials. In August, Rev. Chandler was dismissed from his position, along with Political Action Committee Chairman Jesse Frierson and Treasurer James

P. Boyd. Robert N. Barnette Jr., president of the Hanover County Branch NAACP, was made interim state president. He was elected last weekend by delegates to a two-year term in the top state leadership role.

While Rev. Rivers, president of the Chesapeake Branch NAACP, never addressed the controversy directly in his keynote address last Saturday, it was clear that parts of his speech were aimed at dousing the heat the NAACP had attracted.

At one point, he admonished members for spending “too much time on minutiae, too much on internal drama.”

While protest organizers initially announced a second protest at the convention hotel later on Oct. 31, those plans were dropped after Mr. Walker was contacted by the Richmond and Henrico police departments on Oct. 30, detailing restrictions on how and where they could operate. A Richmond Police officer was present during the protest outside the NAACP headquarters.

“Our message is for Dominion,” said protesterAndrea Miller, a member of the Caroline County Branch NAACP and executive director of People Demanding Action.“Stop trying to pretend ... that what you are doing is OK with the NAACP. We are here to say it is not OK.

“Do not make it a point of saying the NAACP supports your fossil foolery in Virginia,” she continued. “We don’t.”