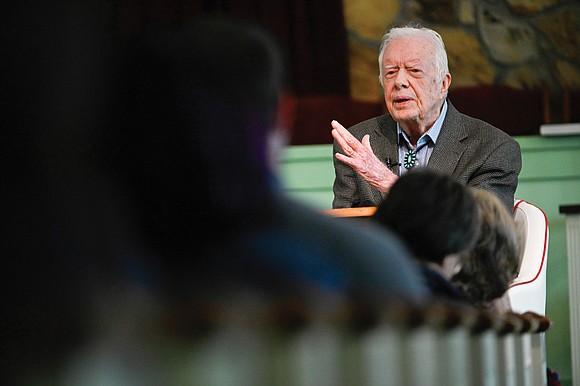 The pilgrims arrive early and from all over, gathering hours before daybreak in an old pecan grove that surrounds a country church. They come, they say, for a dose of simple decency and devotion wrapped up in a Bible lesson. The teacher is the 39th president of the United States, Jimmy Carter.

Nearly four decades after he left office and despite a body that’s failing after 95 years — he reportedly was up and walking a day after undergoing surgery Nov. 13 to relieve pressure on his brain from bleeding linked to recent falls — the nation’s oldest-ever ex-president still teaches Sunday school roughly twice a month at Maranatha Baptist Church in his tiny hometown of Plains in southwest Georgia. His message is unfailingly about Jesus, not himself.

The church has only 30 or so members, but as many as 450 people attend any week Mr. Carter teaches. About 200 people fill the sanctuary, with pale-green walls and stained glass windows, and others gather in side rooms where the lesson is shown on TVs.

It’s nearly impossible to separate even an ex-president from politics, and some come because they’re Democrats who recall voting for Mr. Carter when he was elected in 1976. Almost uniformly, they’re dismayed by the tone of President Donald Trump and his Republican administration.

But President Trump has only been in office since 2017 and Mr. Carter has been drawing crowds for years. Those who attended Mr. Carter’s most recent lesson on Nov. 3 said they just wanted to be in the presence of someone who seems kind, humble and godly despite having been a world leader.

“He’s a role model and an inspiration for both of us, both in public service and in faith,” said visitor Doug Kluth. He and his wife, Ramona, drove 2,400 miles round trip from their home in Columbus, Neb., to see Mr. Carter in person.

John and Sarah Dyer packed their four daughters, ages 2 through 12, into their Honda Pilot for the 1,700-mile round trip to Plains from suburban Chicago.

“To see a man who was once on top of the world choose to spend his twilight years lifting the world higher was inspirational to my family and I,” Mr. Dyer wrote to the church’s pastor in a letter shared with The Associated Press.

Mr. Carter faced mockery for his Southern Baptist faith in 1976 when he said in a Playboy magazine interview that he was guilty of adultery in his heart because he lusted after women. The soul-baring sentiment paralleled Jesus’ words in the Sermon on the Mount, but it came across as odd and

narrow-minded to many. These days, with a twice-divorced president who curses in public and once said he’d never asked God for forgiveness, Mr. Carter’s approach to life — with his wife of 73 years, Rosalynn, by his side — seems especially appealing to fans. They say they admire Mr. Carter’s work to eradicate disease and monitor elections worldwide; the time he has spent helping build homes as a volunteer with Habitat for Humanity; and his advocacy for food programs and rural health care in his home county. Many were touched by photos of a bruised-but-smiling Mr. Carter performing volunteer work after he fell and hit his head in October.