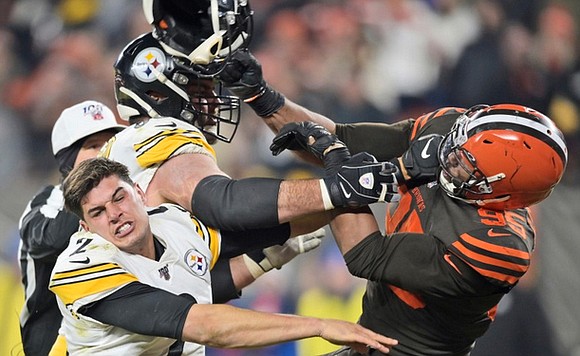 Swinging a football helmet at someone’s head is a terrible thing.

Swinging a baseball bat at an opponent’s noggin is far more hazardous.

The sports world has been abuzz about the NFL “Footbrawl” on Nov. 14 in which the Cleveland Browns’ Myles Garrett lost control of his senses.

The Browns defender, in an end- of-game rage, ripped the helmet off Pittsburgh Steelers quarterback Mason Rudolph. Even worse, he slammed Rudolph on top of his head with the helmet.

No one was seriously hurt, but Garrett has been suspended indefinitely and lesser penalties have been doled out to others caught up in the fracas.

Frightful as it was, it was child’s play compared to what unfolded in a baseball game on Aug. 22, 1965, at San Francisco’s Candlestick Park.

In one of the ugliest sports scenes ever, angry San Francisco Giant Juan Marichal swung his bat at Los Angeles Dodgers catcher John Roseboro, splitting the top of his head. The injury required 14 stitches.

A bench-clearing brawl broke out. Another Giant, on-deck hitter Tito Fuentes, held his bat in a cocked position, but never swung it.

Umpire Shag Crawford tackled Marichal, who continued kicking, with the ump suffering cuts in the process. Others suffered minor injuries.

If not for Giants superstar Willie Mays, the brawl might have been much worse. In the role of peacemaker, Mays ushered Roseboro, a personal friend, to safety and helped calm the situation.

Later in the game, Mays slugged a two-run homer run off Dodgers pitcher Sandy Koufax, leading to a 4-3 Giants victory.

By today’s standards, the penalties for that fight were light. Marichal was fined $1,750 and suspended for eight days.

That Sunday afternoon game had been a pressure cooker prior to Marichal’s bizarre decision to strike Roseboro in the head — an action never seen before or since on a big league diamond.

In a battle of future hall of famers, both pitchers — Marichal and Koufax — had thrown pitches perilously close to hitters, seemingly on purpose.

Batting in the bottom of the third, Marichal felt catcher Roseboro intentionally had returned a throw to Koufax near his cheek.

Speaking later, Roseboro admitted the close call was “no accident.” Marichal confronted Roseboro, who removed his mask. After the men exchanged expletives, Marichal began swinging his bat like a club.

Contributing to the incident, perhaps, were disturbing activities away from the stadium. A bloody civil war was raging in Marichal’s homeland of the Dominican Republic.

Regarding the recent football violence, it remains to be seen if Garrett and Rudolph will ever make up. But there is a happy ending, of sorts, to the Marichal-Roseboro feud.

In 1975, Marichal was traded to the Dodgers. Years later, Marichal and Roseboro played together in a Dodgers’ Oldtimers game. Roseboro let it be known he carried no grudge.

In 2002, Roseboro, one of baseball’s first African-American catchers, was laid to rest in Los Angeles at age 69. Against all odds, Marichal, his one-time adversary, served as a pallbearer and offered an inspiring tribute.

All was forgiven, it seemed. That doesn’t mean it will be forgotten.