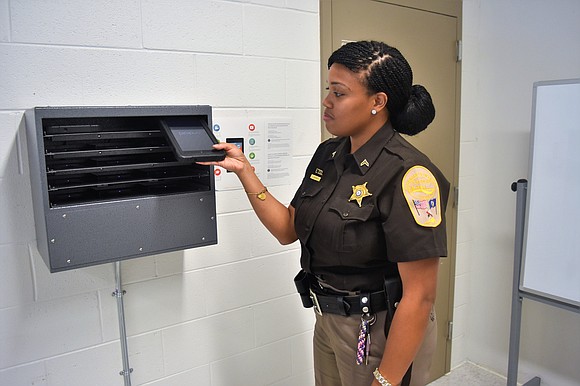 Computer tablets are making it easier for families and inmates at the Richmond Justice Center to stay connected.

Inmates now can have video calls with spouses, children and others on their visitation list.

They also can take educational courses online, arrange medical appointments, file grievances and handle other internal communication with jail staff using a tablet available in their cellblock or pod — eliminating paper messages that could get lost.

A tablet sits in a docking station in a pod or cellblock at the Richmond Justice Center. Every inmate is assigned a user name and PIN to use the tablets.

“This has been great,” said inmate Oro D. Louis, 40, who has two years to serve at the jail.

Currently, he is taking a course in micro-economics and looks forward to studying other online courses offered through the nonprofit Khan Academy, whose mission is to provide “a free education for anyone, anywhere.”

Sheriff Antionette V. Irving, who previously added an online inmate search function for the public to use, introduced the tablets in July as the latest technology innovation at the jail.

Since then, every inmate processed at the jail has been provided a unique use name and a PIN that allows him or her to sign in to use the tablet.

“This is something I wanted to do even before I was elected,” Sheriff Irving said during an interview last week with the Free Press.

During her time as a major with the Henrico County Sheriff’s Office, she said she became aware of other jails across the country installing tablets to improve communications inside the jail as well as enabling inmates to have more connec- tions outside.

After winning election to the office in 2017, she put that on her “to-do” list and made it a priority this year. Richmond now joins the Chesterfield County Jail in installing tablets; Henrico’s jail has not.

Maj. S.M. Bagby, who manages administration and information technology in the Richmond Sheriff’s Office, led the effort to make it happen with GTL, the company that operates the inmate phone service.

She and Sheriff Irving believe the tables have reduced some of the potential for conflict among the 840 inmates that, on average, are housed at the city Justice Center.

Each pod has up to four telephones, and before the tablets arrived, inmates faced rationing and time limits on their use. With the tablets, there are more outlets for phone calls.

Because there are often fewer tablets than the number of inmates in a pod, the inmates “have had to learn to share,” Maj. Bagby said.

The tablets have not stopped personal visits. Each day, hundreds of people come to the jail to visit with inmates. They are separated during the visit by a clear divider.

The video call is pricey at 25 cents a minute, which is at least double the cost of a standard phone call.