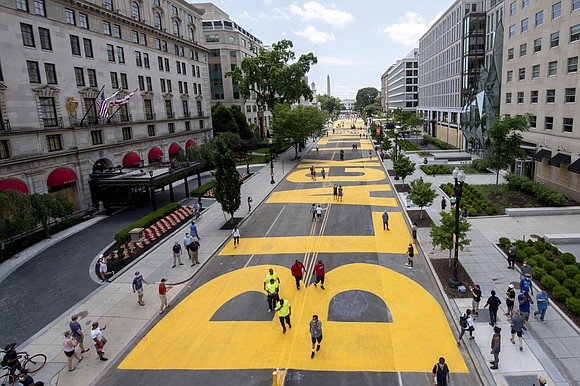 The Washington Monument and the White House are visible behind the words Black Lives Matter sign that has been painted in bright yellow letters on the 16th Street by city workers and activists, Friday, June 5, 2020, in Washington. (Khalid Naji-Allah/Executive Office of the Mayor via AP)

A 200-foot “Black Lives Matter” mural will be painted Downtown near the State Capitol.

Venture Richmond received unanimous approval from the city Public Art Commission and the Richmond Planning Commission for the mural, which has been in the works for nearly two months by the Downtown booster organization, artists Hamilton Glass and Ed Trask and various community groups.

The artwork is to be painted in large yellow letters in the 800 and 900 blocks of East Grace Street near St. Paul’s Episcopal and St. Peter Catholic churches and the Barbara Johns Building at the corner of 9th and Grace streets leading to the entrance to Capitol Square.

The mural is based on similar projects created in Washington, Minneapolis, San Francisco and New York City, among others, following the death of George Floyd at the hands of Minneapolis police and recent nationwide protests against police brutality and racial injustice.

Mr. Glass and Mr. Trask, who are known for many other murals around the city, will lead the privately funded project.

Venture Richmond, a nonprofit led by business and community leaders, proposed the location of the mural. Deputy Executive Director Anedra Bourne said the placement is significant because of its proximity to the Capitol, City Hall and other prominent government buildings.

The city Department of Public Works still needs to approve a permit for the mural, the city’s public art coordinator said. Work on the project is expected to begin in the next month.