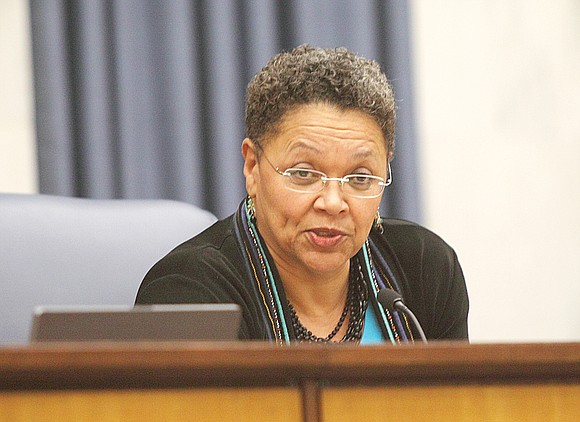 For her, the plan that has been four years in the making appears to keep the city on its current trajectory, with continued neighborhood gentrification that is chasing out longtime residents and a focus on increasing development in current growth areas.

The 17-year City Council veteran and chair of the council’s Land Use, Housing and Transportation Committee is preparing to call on her colleagues to reject the plan that is up for consideration on Monday, Dec. 14.

Ms. Robertson wants the plan returned to the city Planning Commission for revision.

For her and any other council member with objections, rejection is the only option based on an opinion from interim City Attorney Haskell C. Brown III. The opinion states that the City Charter bars the council from seeking to amend the plan. The only options are to adopt it or return it to the Planning Commission with an explanation of changes for the commission to consider.

For Ms. Robertson, who represents the council on the city’s planning arm, the opposition she is raising is a change in position. She acknowledges that she did not delve into the plan deeply enough before it cleared the commission in early October, triggering a 90-day clock for the council to adopt it.

Late last month, her committee also sent the plan to the full council without a recommendation after 5th District Councilwoman Stephanie A. Lynch called for changing the recommended land use for Oregon Hill for neighborhood mixed-use to residential. Ms. Lynch called for the change based on neighborhood concerns that the new designation would open the door to replacing current homes with larger buildings.

Among other things, Ms. Robertson is concerned the proposed master plan puts heavy emphasis on the rise of development in areas that already are high growth, such as Broad Street, Scott’s Addition, Arthur Ashe Boulevard, Manchester and Stony Point.

In her view, the plan leaves out other sections of the city with major corridors that she believes offer opportunities for significant commercial, retail and apartment development — notably Midlothian Turnpike, Hull Street, Meadowbridge Road, Nine Mile Road and U.S. 1 in South Side.

While these areas might not be “hot” at the moment, she said that with the right mix of incentives that could change over the next 20 years.

Ms. Robertson, who once led a non-profit housing group that spurred revival of Highland Park, also expressed concern about the kind of residential development that is called for in much of the eastern portion of the city.

She noted that the plan calls for maintaining areas where the most blighted property is located. She said those areas are crying out for greater density and growth as residential islands that could be redeveloped for larger lots and single-family homes that would continue to raise the area’s values.

Instead of being included in business development, she said the plan is indicating that those areas of blight could provide the acreage needed to meet the demand for new and more expensive single-family homes.

As spelled out in the plan, Richmond is expected to continue to add to its population over the next 20 years — 30,000 new residents under a low-growth scenario, 70,000 over a medium-growth scenario and 110,000 in a high-growth scenario.

In all three scenarios, additional acreage would be needed for single-family homes and apartments to accommodate the population increase.

Richmond has seen a 17 percent growth in population since 2000 and currently is estimated to have 230,000 residents.

In Ms. Robertson’s view, the prime target for gaining the needed acreage for new homes would be on the city’s east side, where most of the blighted property happens to be.

She also is concerned that the plan gives short shrift to the redevelopment of public housing, a top priority, and does little to spell out plans for affordable housing to ensure adequate housing for people on the lower side of the income scale.

According to the plan, since 2000, the surge in property values has increased the number of families spending more than 30 percent of their income on rent and other housing costs by nearly 10 percentage points to about 42 percent of the population.

Down the road, she said that a lot of people could have regrets if City Council does not take a harder look at what the plan is proposing and the impact it could have.

“I think more time is needed so we can get this right,” she said.