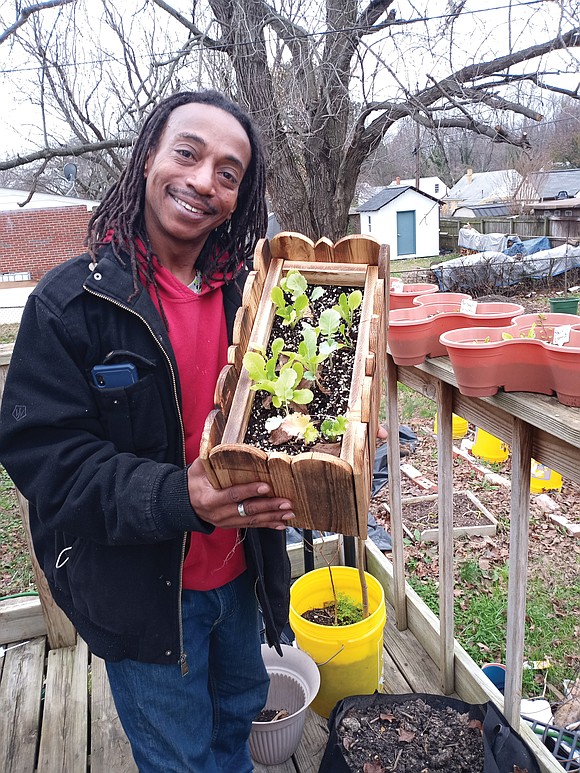 Randy Battle has a passion for gardening. Now he’s sharing that passion with a worldwide audience.

The gardening lover has turned himself into a gardening guru, spreading lessons far and wide on how to grow vegetables, greens, berries and fruit trees cheaply, thanks to the online video-sharing platform YouTube.

Two years after posting his first video on a whim, the 46- year-old Henrico County resident finds himself regularly attracting 12,000 viewers for his weekly and sometimes daily broadcasts of “Gardening With Skinny Boy Randy.”

His viewers live across the country and in 13 nations overseas, YouTube’s reports show.

Because of his following, companies send him seeds and other products to test and YouTube has featured him in a national ad for its service.

One woman is such a fan that her family flew him to California in August so he could spend time with her and her garden.

While there are plenty of others offering online gardening advice, Mr. Battle’s audience appears to enjoy his no-frills approach in which he seeks to keep it simple, eliminate jargon and provide step-by-step instruction.

He also has a penchant for zany facial expressions to help make it fun.

His rental home now serves as his studio and the indoor and outdoor garden site where he shows viewers how to plant and reap the most reward using the least amount of energy and resources possible.

Mr. Battle’s trademark slogan is “We ain’t got no money, OK, OK!” as he explains how to do something without much out-of-pocket outlay.

To him, plastic buckets, cheap trays, even plastic milk jugs and cloth grocery bags are ideal planters for lettuce or herbs or tomatoes or other plants. Outside his home, inexpensive plastic buckets hold fruit trees.

Even the one raised bed that he has installed was made simply, with four pieces of castoff wood nailed together and separators for the different types of plants.

He relies on compost as his growing medium. But instead of buying expensive bags of compost, he, with help from a neighbor, relies on bulk loads from a nearby company that mostly serves landscape firms.

He cautions his viewers not to plant huge gardens but, instead, to stick to growing what their households need. “Grow what you can eat” is his motto.

For Mr. Battle and his audience, gardening is 365 days a year. Although most people might think the arrival of winter means the growing season is over, Mr. Battle said there are plenty of winter-hardy plants — primarily greens — that can be planted right now.

His secret to success: He pays $1 or $2 for the cheapest plastic tarp that is designed as floor protection for painting and uses it to cover the plants in the raised bed when it is freezing. When the sun shines, he said, it warms up the covered plants.

Mr. Battle also has set up an inexpensive greenhouse in part of his garage. He said he bought four lamps for $30 that provide the kind of light the plants need. He points to plants that appear to be thriving.

In every case, he shows his audience what he has done and how it is working. He also is happy when viewers offer comments or suggestions for improvement.

Mr. Battle said he got interested in gardening while spending summers at his grandparents’ farm in North Carolina. He found he has a green thumb.

Still, he kept his hobby to himself until he posted a video of himself planting some tulip bulbs.

He began responding. And he also was encouraged to make more videos that started with the basics.

“Some people think when you plant a seed, it’s supposed to come up in a day or two,”he said. “They think they are failures when it doesn’t. But that’s not how it works,” he said.

Mr. Battle had to explain that seeds need time to adjust to their new home and to germinate or grow. “You need a little patience,” he said.

He’s not worried about running out of information to share. Given that gardening can go on 365 days a year, he wants people to have the information they need no matter the season.

For him, the videos are a labor of love. But it helps that YouTube now sends him a check based on the number of people clicking onto his site.

While Mr. Battle has a full-time job, he has his fingers crossed that his audience will continue to grow so that, one day, he will be able to spend all of his time being a gardening educator.