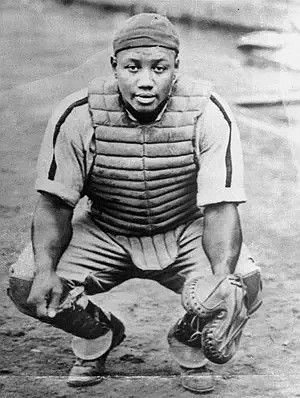 Slugging catcher Josh Gibson always had the talent to be a Major League Baseball player. That was never in question.

But it wasn’t until last week that the man known as the “Black Babe Ruth” officially became a major leaguer.

In what Major League Baseball called a “long overdue oversight in the game’s history,” seven Negro Leagues that operated between 1920 and 1948 have been granted Major League status.

That means some 3,400 players for those Negro League teams are now Major Leaguers and that their statistics will be integrated into MLB records.

Gibson may become the “new” single season batting average champ, having hit .441 for the Homestead Grays in 1943.

Other Negro League players who could have their Major League statistics adjusted include Jackie Robinson, Willie Mays, Roy Campanella, Ernie Banks, Don Newcombe, Monte Irvin and Satchel Paige. All played in the Negro Leagues prior to becoming official big leaguers after Robinson broke baseball’s color line in 1947 with the Brooklyn Dodgers.

MLB, along with the Elias Sports Bureau, will research Negro League statistics and records before officially altering any numbers.

While few question the talent of the Negro League stars, the Negro Leagues were operated much different from the traditional MLB teams. Gibson’s .441 in 1943 came in just 80 games. Major League teams at the time were playing 154 games.

The Negro League teams played much shorter league schedules, enabling them to book potentially more lucrative games on the barnstorming circuit. In those settings, often the competition was not Major League quality.

Playing the shorter league seasons enabled the players to pick up additional salaries by joining fall and winter leagues in Mexico and the Caribbean.

Gibson, who died in 1947 at age 35, is said to have hit more than 800 homers, but that’s counting games in the Negro Leagues and barnstorming, as well as stints in Mexico, Puerto Rico, Cuba and the Dominican Republic.

According to the MacMillan “Baseball Encyclopedia,” Gibson hit .362 in 16 Negro League seasons, but that’s covering just 510 games. In games against true Negro League opponents, MacMillan credits Gibson with 146 homers. So what do you count, and what don’t you count?

But none of that does justice to Paige, who may have won 200 more games barnstorming and playing outside the United States. An appearance by Paige assured a sellout and he treated the customers well. Among his fan-friendly gimmicks was to ask all his defensive players to sit down. Then Paige would strike out the side all by himself.

Paige finally got a chance to play in the Majors and was part of Cleveland’s 1948 World Series championship. Gibson wasn’t so fortunate. Along with other such Negro League icons as Cool Papa Bell, Oscar Charleston, Buck Leonard and so many others, he came along too soon.

These players had the talent but, because of the color of their skin, were not able to compete on what was considered the highest level.

That said, amends are being made. It’s never too late to do the right thing.