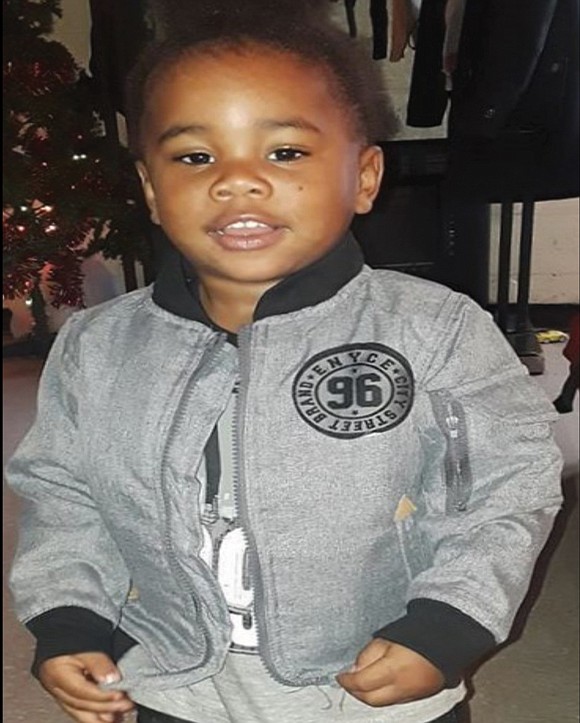 A candlelight vigil in memory of 3-year-old Sharmar L. Hill Jr., who was fatally shot while playing last Saturday afternoon outside his family’s home in the Hillside Court public housing community, will be held 3 p.m. Saturday, Feb. 8, in the 1700 block of Southlawn Avenue.

Charles D. Willis, executive director of United Communities Against Crime, asked that people bring red, blue and green balloons, as well as candles, to the vigil which will be held in the block where the toddler was found.

A funeral service for Shamar will be held 12:30 p.m. Monday, Feb. 10, at New Life Deliverance Tabernacle, 900 Decatur St. in South Side, with Dr. Robert A. Winfree officiating.

About 4:09 p.m. last Saturday, Richmond Police were called to the 1700 block of Southlawn Avenue for reports of random gunfire and a youngster shot. Officers arrived and found the toddler with a gunshot wound. He was taken to the hospital, where he later died.

The toddler’s father, Sharmar L. Hill Sr., told a local television station that the tod- dler’s older siblings were looking after him Feb. 1 when the shooting occurred. He said their mother, Shaniqua Allen, was at work and he was away in Farmville taking care of his mother, when he got a call that the child had been shot.

He said the youngster’s 14-year-old sister rushed the wounded child inside to safety as other siblings called 911.

He said they rushed to VCU Medical Center, where he died.

Mr. Hill expressed appreciation for the community’s outpouring of prayers and support and said he hopes to move his family away from Hillside Court and into a different environment.

“As you can imagine, we are devastated by this news,” Mr. Duncan said in a statement. “Our deepest condolences go out to the family of the young victim.

“Our director of public safety is currently working with local law enforcement to determine the events that led to this tragedy,” he stated.

Police are investigating the homicide and several incidents that occurred nearby during the weekend, including a robbery and carjacking about 9:58 p.m. Friday, Jan. 31, in the 2600 block of Berwyn Street, in which a woman ride-share driver reported that two male customers brandished a firearm and robbed her and drove off in her newer model white Kia.

Police said just before midnight on Friday, and again early on Saturday, Feb. 1, officers were called to the 1600 block of Rosecrest Avenue for reports of random gunfire.

Detectives responding to the homicide investigation also received information that a white vehicle sped away from the scene after the shooting, authorities said.

Early Sunday, Feb. 2, police arrested Antonio L. Harris, 21, of the 1300 block of Evergreen Avenue and charged him with carjacking and use of a firearm in commission of a felony.

Police asked that anyone with information about the toddler’s death contact Detective J. Fultz with the Richmond Police Department’s Major Crimes Unit, at (804) 646-3929, or contact Crime Stoppers at (804) 780-1000 or www.7801000.com. The P3 Tips Crime Stoppers app for smart phones also may be used. All tips are anonymous.