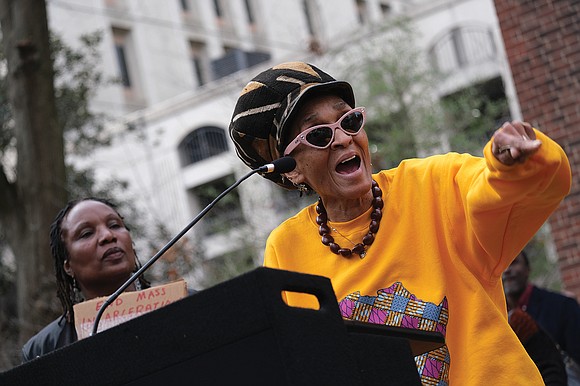 Janet “Queen Nzinga” Taylor of the Defenders for Freedom, Justice and Equality urges the crowd at last Saturday’s prison reform rally to spread awareness of the issues. Photo by Sandra Sellars

More than 50 supporters attended the rally, which allotted speaking time for organization leaders and family members of those incarcerated. Letters from inmates also were read.

Many participants held posters telling the stories of their incarcerated loved ones.

The rally was led by the Virginia Prison Justice Network, which includes 20 organizations working for reform in the Virginia Department of Corrections. The network was formed by those who are or were incarcerated and prison reform activists with the goal of creating justice and a voice for incarcerated individuals and their families.

“We’re not just looking for legislative reform. What we want is a total transformation of the system,” said Margaret Breslau, co-founder of the Virginia Prison Justice Network. “And in order to do that, prisoners and their family members have to have a seat at the table.”

State Sen. Joseph D. “Joe” Morrissey, a Democrat who represents Petersburg, Hopewell and parts of Richmond and the counties of Chesterfield, Prince George and Dinwiddie, attended the rally. He is chief patron of multiple parole reform bills.

“We abolished parole in ’95 and it did nothing but only eviscerate people’s chances and feelings that there’s hope or there’s a light at the end of the tunnel,” Sen. Morrissey said. “If we want to incentivize prisoners to take advantage of courses, get an education and become purposeful when they’re released, we’ve got to get involved.”

(Sen. Morrissey served three months of a six-month sentence in the Henrico County Jail after being convicted in 2014 of a misdemeanor of contributing to the delinquency of minor. Then a member of the Virginia House of Delegates, he became the first legislator to commute from jail to the General Assembly. He has since married the woman, a former receptionist at his former law office.)

Dispatches from behind bars

Several inmate letters were read at the rally, including a letter from Hassan Shabazz, co-founder of the Prisoner of Conscience and Virginia Prison Justice Network, urging people to take action and speak up against inmate inequities.

“We cannot be satisfied with what we perceive as victories where no meaningful change has taken place,” Mr. Shabazz wrote. “On the inside, we must do our part to qualify ourselves for a second chance. And on the outside, we need those who believe in second chances to make that presence felt at the General Assembly.”

Dale Pughsley, also known as Askari Danso and co-founder of the Prisoner of Conscience and Virginia Prison Justice Network, said black communities, mothers, children and economies are left to suffer as a result of incarceration.

“My 22 years of experience as a prisoner in Virginia teaches me that prisons house poor, uneducated blacks, many of whom also have mental illnesses,” Mr. Pughsley wrote. “Most of these men and women are thought of as incapable of contributing to the modern knowledge-based economy in any real way.”