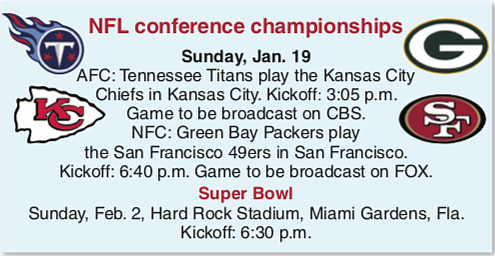 Of the four NFL teams in contention for the conference championship, only the Tennessee Titans have never won a Super Bowl. The Titans reached a pinnacle game in 1999, losing to the St. Louis Rams 23-16.

Originally the Houston Oilers, the franchise won AFL titles in 1960 and 1961.

The franchise moved from Houston to Nashville in 1997.

The Kansas City Chiefs, originally the Dallas Texans, won the 1969 Super Bowl 23-7 over the Minnesota Vikings. Among the Chiefs’ stars that season was Richmonder Willie Lanier.