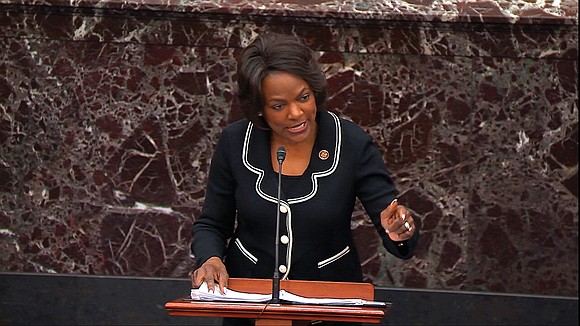 In this image from video, Rep. Val Demings of Florida, a House impeachment manager, speaks Tuesday in support of a rules amendment during the impeachment trial of President Trump held in the U.S. Senate. Still cameras are not allowed in the trial. Photo from U.S. Senate Television via Associated Press

WASHINGTON - The U.S. Senate plunged into opening arguments Wednesday in President Trump’s impeachment trial, with Democratic House managers detailing the case that the president abused his power and should be removed from office.

After late-night deliberations over the rules almost ensured no new witnesses will be heard, the trial picked up speed. There were few signs of Republican resistance to quickly assessing — and voting — on charges related to President Trump’s dealings with Ukraine.

With a Republican majority, the Senate rejected all attempts by Democrats to bring in new witnesses — including top Trump aides — to expose President Trump’s “trifecta” of offenses and are likely to do so again next week, shutting out any chance of new testimony. 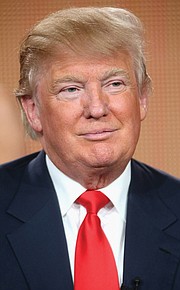 President Trump, who was in Davos, Switzerland, attending a global economic forum, suggested Wednesday he would be open to his advisers testifying, then quickly backtracked, saying there were “national security” concerns that would stand in the way.

A marathon session of nearly 13 hours started Tuesday with a setback for Republican Senate leader Mitch McConnell and the president’s legal team, exposing a crack in the GOP ranks and the growing political unease over the historic impeachment proceedings unfolding amid a watchful public in an election year.

But the session ended around 2 a.m. Wednesday with Republicans easily approving the new trial rules largely on their terms.

“It’s about time we bring this power trip in for a landing,” said White House counsel Pat Cipollone, the president’s lead lawyer, lashing out at the House Democrats prosecuting the case.

“It’s a farce,” he said about the impeachment proceeding, “and it should end.”

Chief Justice Roberts opened the trial Tuesday afternoon with House prosecutors on one side and President Trump’s team on the other in the well of the Senate as senators sat silently at their desks, under oath to do “impartial justice.” No cell phones or other electronics were allowed.

As the day stretched deep into the night, lawyerly arguments gave way to more pointedly political ones. Tempers flared and senators paced the chamber. Democrats pursued what may be their only chance to force senators to vote on hearing new testimony.

After one particularly bitter exchange, Chief Justice Roberts intervened, taking the rare step of admonishing both the Democratic House managers and the White House counsel to “remember where they are.”

“I think it is appropriate at this point for me to admonish both the House managers and the president’s counsel in equal terms to remember that they are addressing the world’s greatest deliberative body,” the usually reserved chief justice said.

He told them that description of the Senate stemmed from a 1905 trial when a senator objected to the word “pettifogging,” because members should “avoid speaking in a manner and using language that is not conducive to civil discourse.”

Over and over, Republicans turned back Democratic amendments to subpoena documents from the White House, State Department, Defense Department and budget office.